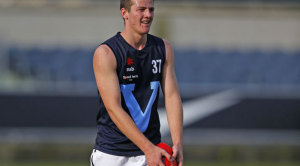 For many young athletes a knee reconstruction can signal the end of a budding sporting career, but for Apeness it may prove to be the beginning of one.

The man mountain from the Eastern Ranges has been a revelation for Vic Metro at the NAB AFL U18 Championships this year, dominating as a mobile ruckman.

After two high-class games against Division 2 sides Queensland and NSW/ACT, Apeness was again one of Vic Metro’s best in the Division 1 victory over Western Australia in Perth a fortnight ago.

Not bad for someone who 18-months-ago wasn’t even playing football.

After showing promise with the Ranges’ U16 program, Apeness decided that his heart lay with rugby union and off he went chasing a different dream.

With his physical attributes: a 100kg and 199cm frame, and a good dose of natural ability, he was soon selected in the Victorian team and inducted into the Melbourne Rebels’ academy program.

All was travelling nicely and a big future as a line-out weapon loomed until a ruptured ACL intervened.

Suddenly football was back on the agenda.

“He just called me up out of the blue and asked if he could come back,” Parkin said.

“Of course we were more than willing to have him and help with his rehab from the knee injury,” Parkin said.

After spending last season on the sidelines and making sure his knee was back to full strength, his return to the field this season has been emphatic.

“We’ve been surprised by how rapidly he’s improved in such a short space of time,” Parkin said.

“It’s one of the most exciting things about Michael, is how much scope he has for improvement.”

After performing well for the Ranges up forward in the absence of possible No.1 draft prospect Tom Boyd (unavailable because of AFL AIS Academy commitments) in the opening weeks of TAC Cup season, Vic Metro selectors identified Apeness as an imposing ruckman who could give the side marking strength all over the field.

For the quietly spoken 18-year-old though, his growing prominence and draft prospects are way beyond his initial expectations.

“At the start of this season I was just looking at playing one game for Eastern. That was the goal, just to make the 22.”

It’s a humility you soon realise is common with the gentle giant, a man whose ego is almost non-existent.

When WA stormed back to within six points a fortnight ago, it was Apeness who stood tall with a match-defining goal.

You just won’t hear the story from the man himself.

“It was really good delivery and I was really happy for the team and happy to be a part of it,” Apeness said in typically modest fashion.

The boy from Donvale Christian College may be quietly spoken off the field but according to Parkin he’s a genuine competitor once he crosses the white line.

“He’s wonderfully compassionate and humble man, but once he’s on the field he has no fear,” Parkin said.

“He reminds me a bit of the way Shane Mumford (Sydney Swans) plays, just jumps into the taller ruckman and offers a real contest around the ground.”

“If we can get him speaking a bit more out on the ground and actually demanding the ball, then I think he’s got the ability to get 20-plus possessions every match.”

Apeness and his Vic Metro teammates will be back in action this Friday when they take on South Australia at Simonds Stadium. Both sides remain undefeated so far in the 2013 NAB AFL U18 Championships.