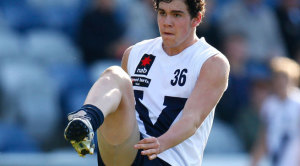 VICTORIA Country has fallen to Western Australia with the last kick of the day in the NAB AFL U18 Championships, writes David O'Neill

WA forward Cameron McCarthy was the hero for the visitors, kicking truly after the final siren to bag his third goal and steal a three-point win.

The Geelong Falcons’ underage star enjoyed a break-out performance with 15 possessions and 11 marks to be his side’s best.

His starring role was rivalled at the other end by Dominic Sheed who kicked four majors and racked up 29 disposals in a best-on-ground display.

With Sheed on fire early, WA slammed on the first two goals of the game before McCartin and Gippsland Power 19-year-old Josh Scott dragged the hosts back into the game.

McCartin was marking everything that came his way and when Scott chimed in, the pair had two each and their team a four-point lead at quarter time.

Despite McCartin continuing his dominance up forward, both sides struggled to hit the scoreboard in the second term.

Midfielder James Tsitas (Falcons) and Zak Jones (Dandeneong Stingrays) were both prominent as Vic Country took a three-point advantage into the main break.

With Sheed’s left foot carving up the hosts, WA took the lead in the third term before McCartin again lifted his side with a late major.

A 49-all score line at the last change was to prove a fitting with the game still in the balance until after the final siren. Twice Vic Country looked home, only for Sheed and McCarthey to stamp their authority on the match.

North Ballarat Rebels hard-nut Matt Crouch improved as the game wore on to finish with a goal and 16 possessions in his return from injury.

Billy Hartung (Stingrays) and Falcons pair Lewis Taylor and Darcy Lang all showed glimpses of their run and carry but ultimately WA found the edge when it mattered.