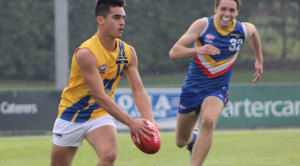 THE Western Jets have cemented their place in the top eight after a dominant 105-point victory over the Eastern Ranges on Saturday, writes Davis Harrigan

Missing the likes of Ben Cavarra, Mitchell Honeychurch and the injured Thomas Boyd, the Ranges were continuously beaten through the midfield and in the forward line by a determined Jets defence.

The slippery ball certainly did not help, but the Jets found the legs early to put three majors on the board from Pele Manivong, David Iaccarino and Brett Bewley.

Matthew Traynor hit back for the Ranges, but the forward line penetration was lacking as Jake McKenzie added two before quarter time, and the margin was 31 points.

Ranges coach Darren Bewick was frustrated by the effort at the quarter time break, and re-iterated that now was a fantastic time to step up and not let the Jets through.

For the first five minutes of the second quarter that’s what the Ranges did. Trent Cody began to press his name for the Ranges, sending through a fine goal, however, Mark Orr and Daniel O’Leary found space and slotted their first goals of the game, before an onslaught of pace from the Jets and several errors from the Ranges saw the margin blow out to 51 points at half time.

James Belo and Nick Evans were gallant for the Ranges, and constantly looked to open the play up and give the forwards a chance. After half time, the Jets kicked 14 goals to five in a powerful display of football.

McKzenie finished with four goals, and Liam Duggan, good around the contests all day, finished with three. Orr, Iaccarino and Manivong each rounded out their games with two.

Twelve individual goal scorers highlighted just how well the Jets worked as a team, finding targets with the wet ball and having plenty of loose players.

Although the Ranges could not find the depth of play that was so crucial against the Geelong Falcons two weeks ago, the likes of Belo, Traynor, Evans, Cody and Jack Edwards would not give up. The Jets piled on nine goals in the last quarter, and worked their way through the contests with a hard attitude.

Jets coach Torin Baker knows that the side has a tough draw ahead, but attributed the win to hard work and desire for the football.

“The reality is we’re playing a really good team next week, the Gippsland Power. At this part of the year, you have to win as many games as possible to put yourself in a good position.”

“Early on, when it was really slippery, we just needed to get the ball forward to create scoring opportunities. I thought we did that really well, and as the ground dried up, we adjusted to the conditions.”

Baker also praised the effort of all his players against a side who knocked off the Geelong Falcons two weeks ago.

“Corey Ellis was really dominant…to come in from school football and get 30 plus possessions was really good. Jake McKenzie up forward was good, and so was Captain Harry King, especially on (Christian) Petracca.”

Having pocketed a substantial percentage boost, the Jets will face the Gippsland Power at Preston City Oval next Sunday, while the Ranges head down the highway to take on the North Ballarat Rebels at Eureka Stadium.