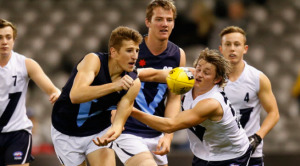 VIC Metro has shrugged off Vic Country to finish the NAB AFL U18 Championships on a high, writes David O'Neill

A midfield brimming with depth and talent, a stubborn defence and an early three-goal cameo from Jack Billings saw Metro eventually pull clear of Country in the final term.

Josh Kelly continued his stunning carnival with 24 disposals, while Mitch Honeychurch racked up 23 and bagged an important goal to stem Country’s third quarter fight back.

Behind them came a host other contributors with hard-nut Nathan Freeman, captain Luke McDonald and the rangy Marcus Bontempelli all finishing with 21 possessions each.

Lewis Taylor was the star for Country with 32 disposals that included 21 hand ball receives, while Dallas Willsmore (two goals) and Matt Crouch (27 possessions) were others to impress.

Jarman Impey was brilliant in patches and Hugh Goddard stoic in defence but ultimately a more polished Metro outfit prevailed.

In a frantic opening it was Metro who settled first with goals to Billings and Apeness ensuring a six-point quarter time lead.

Country lost the leg speed of Darcy Lang early in the game when he limped off with an ankle injury and while Crouch was finding plenty of the ball at the coal face, his teammates were struggling to find a target up forward.

It was a similar story for Metro without big man Tom Boyd, leaving Billings and Lennon to hit the scoreboard in another error-ridden quarter.

Country at last found some forward momentum in the third term to draw within a point of Metro, but the ascendancy was short lived.

First Honeychurch’s opportunist snap out of the pack found its mark and then James Sicily capitalised on a Country mistake to make the margin 13 points at the last change.

With Goddard and Zac Jones on top in defence, Country were never going to let Metro sprint away and it took until the nine-minute mark of the final term before the knockout blow came.

A clever goal from Jordan Walker and another just minutes later to Marcus Bontempelli made the difference 25 points and ended all hopes of an upset.

Taylor capped his stellar game with a dribbling goal from the boundary to reduce the final margin to 19 points, but it would be Metro’s night.