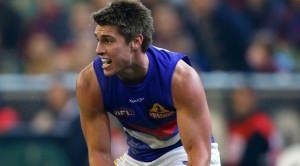 The tall defender topped the Western Bulldogs’ possession count with 32 touches (14 kicks and 18 handpasses) in their four-point win over the Greater Western Sydney Giants in Canberra last Saturday.

The 20-year-old played most of the 2012 season for Williamstown in the Peter Jackson VFL, but got his opportunity to make his AFL debut in Round 19 and played four of the last five rounds. He has played five matches in 2013, all since Round 10.

“Michael is progressing really well, and just keeps improving steadily as a genuine tall defender. He showed some good signs towards the end of last season with his appetite to compete and great capacity to run, and has continued that this year.

“There are still some things to work on in his game, but we are optimistic about where he is heading as a player,” he said.

Michael is the second Bulldog to be nominated in 2013 following former Oakleigh Charger Jackson Macrae in Round Eight.

He was selection 39 in the 2011 NAB AFL Draft and was recruited from the Cannons and the Greenvale Junior Football Club.

Michael represented Vic Metro in the 2011 NAB AFL Under-18 Championships and was named an Under-18 All-Australian.

He is the younger brother of the 2012 NAB AFL Rising Star winner, Daniel Talia.