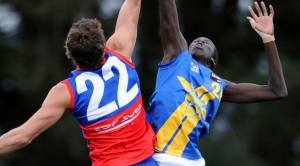 DUOM Dawam has lived through what most of us only read or watch in trepidation in various media platforms.

Dawam spent several years living in fear as he and family members fled Sudan to Egypt before migrating to Australia when he was nine.

While he’d heard of Australia he knew nothing of Australian Rules. Basketball was more his bag and at 201 cm that was understandable.

Dawam’s first introduction to Australian Rules was in the school yard at recess and lunch time. He remembers having little confidence or feel for the game, and didn’t really know how to hold or kick the ball, but he went along with some friends to try out with local club Wyndham Vale.

“From school to local level was a big step for me,” Dawam recalled.

That was back in 2009. Over the past four years, Dawam has made spectacular progress.

He has represented the World Team in the AFL Under 16 Championships, gained selected in the AIS/AFL Academy, won the inaugural Jim Stynes scholarship and now carries the mantle as the No 1 ruckman for Western Jets.

Certainly, the AIS/AFL Academy proved an eye-opener. “That’s where it all began for me,” Dawam said

Jets’ Talent Manager Shane Sexton marvels at the progress made by Dawam since he joined the club’s Brad Johnson summer training squad in 2011-12.

Sexton said Dawam continues to impress with his ruck work as his knowledge of the game expands as well as taking advantage of the one-on-one strength, conditioning, skills and game situation scenarios with Dan Haberfield.

“We think that he is improving rapidly,” Sexton said.

“He has a sense for the game. His ability to get the ball off the ground given the size he is and his capacity to handball the footy is really good. Marking and kicking are the two areas we’re working on.”

Dawam uses the space outside his home to teach his younger brothers what he’s learned about the game.

“I go out the front yard and just kick with them, train them a little bit,” Dawam said.

“I want them to start young so when they become older they can follow that footstep.

“There’s not many Sudanese players in the AFL …. I look to what Majak’s done and that’s what I want to do.

“I want other Sudanese kids and my brothers to follow on as well.”

Dawam said Daw has made a significant impact in his life. Both came through the Wyndham Vale juniors, albeit four years apart.

Daw attends the Jets’ training where the multicultural squad bearing his name train. “I have a chat to him, ask him how AFL is going, how do you manage it, how does he manage his time.

Duom Dawam is already filling with pride all those who know him and the journey he’s taken.