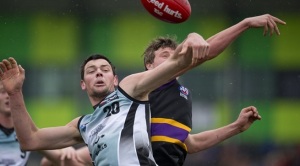 THE Murray Bushrangers have cemented their spot in the top four with a comprehensive 65-point win over the North Ballarat Rebels in round thirteen of the TAC Cup, as Shane Goss reports.

Played in persistent rain at Highgate Reserve, the Bushrangers jumped the Rebels in the first quarter and from there on the result was never in doubt.

Tall forward Max King booted a game-high four goals for the Bushrangers equalling the Rebels goal tally off his own boot. At the first break the Bushrangers led by sixteen points as the rain continued to fall making conditions greasy.

Promising duo Jarman Impey and Michael Gibbons were afforded too much latitude by their North Ballarat opponents and looked dangerous every time they went near the Sherrin. In the second quarter King's height was telling in the goal square for the Bushrangers, snaring two goals and providing Rebels defender Arthur Armstrong with a headache.

Jade Cleeland was having a good battle in the ruck with Rebels opposite Kyle Hendy as the Bushrangers extended their lead to thirty points at half-time. North Ballarat coach David Loader took his players behind closed doors during the break unhappy with his side’s first-half commitment.

Bushranger's coach Darren Ogier was more pleased with his chargers however as his pre-game request of ‘passion, pressure and purpose’ was paying off. Ogier instructed them to play man-on-man when the Rebels attacked, limiting their opportunities going forward.

He got his wish as they held the Rebels goalless in the third quarter and kicked another four themselves to put the match beyond doubt leading by 53 points at the final change. A sour note for the Bushrangers was the injury to Nick Mellington who was stretchered from the ground following a heavy clash just before three-quarter-time.

The final quarter was a dull affair in more ways than one as the sky darkened and the rain became heavier. The majority of the play was confined to the Bushrangers forward half, well way from the loyal patrons who had braved the conditions at Craigieburn.

Goals to Matthew Munro, Nick Holman and King pushed the Bushrangers’ lead out to more than 70 points before Hendy conjured a late goal for the Rebels, their first since time-on in the second quarter.

For the Bushrangers, Impey and Gibbons were superb. Cleeland took the points in the ruck; Dylan Wilson and Jake Sharp won plenty of the ball and were among their side’s better players.

In the Rebel's camp, Matt Crouch, Louis Herbert and Lachlan Cassidy continue to impress despite their team's fortunes. Daniel Butler is an improving player and Mitchell Bowman tried hard down back.

After the development weekend this weekend, round fourteen sees the Murray Bushrangers take on the Calder Cannons in Wangaratta while the North Ballarat Rebels are home to the Western Jets.