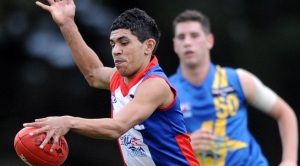 Coming off a development weekend we look forward to the return of TAC Cup action this weekend. Madeline Grech previews the Rd 14 action.

Round 14 looks promising, with a number of blockbuster games that will influence the makeup of the top eight by seasons end.

On Saturday morning we have Dandenong Southern Stingrays taking on Sandringham Dragons. Both teams will be hoping their accuracy towards goal improves as both the Stingrays and Dragons combined for 30 behinds in round 13. The Stingrays, which are high on percentage with 117.38%, are looking to overcome the Dragons for a hopeful jump to fourthposition on the TAC Cup Ladder. Stingrays Matt Rennie is coming off another terrific performance, having kicked 13 goals in the past 5 rounds, booting 5 goals last weekend against Bendigo Pioneers.

The Calder Cannons, who are coming off a one point thriller against Western Jets, are still trying to keep their season alive with a win possibly getting them a top eight position. Their opponents this weekend the Murray Bushrangers, are fighting to keep a top four position. Cannons are hopeful that Aaron Christensen’s kick start to the season last round is backed up with a similar game style.

The Western Jets are hoping to cement a top 8 position as they take on North Ballarat Rebels. James Sicily, who had a terrific championships playing for Vic Metro, was welcomed back last week, continuing his great form with 4 goals. James is expected to have another good performance this week. Rebels Matt Crouch is expected to continue his come back from midyear injury, and a likely return to the TAC Cup after his VFL debut as 23rd player last weekend. Crouch who recently said that he’d never missed a game of football due to injury, should have touched wood as two weeks later had suffered a broken hand. Brother of Brad Crouch, who was drafted to Adelaide Crows, is still hopeful that Matt is still in the mix for a top selection after overcoming injury and playing for Vic Country in the under-18 national Championships.

An exciting clash between Eastern Ranges and Gippsland Power at Morwell Football Ground at 1.00pm has become a fight for second place. Power welcome back captain Josh Cashman but are still without leading goal kicker Josh Scott who will line up for VFL side Casey Scorpions. Back in round 7 Ranges came out on top defeating the Power by a margin of 27 points with Tom Boyd having a stellar game with 6 goals and best on ground performance but with injury is forced to miss another week leaving the door open for others to step up in his absence.

In other matches we have Oakleigh Chargers who take on Bendigo Pioneers down at Warrawee Park on Saturday afternoon even though both teams aren’t expected for a top eight position, still expect to be a competitive game. Chargers will be without, Vic Metro stars Will Maginness and Darcy Byrne-Jones, both coming off a terrific games last round against Northern Knights. It leaves room for the rest of Oakleigh Chargers list to step up and take the game on. Bendigo sitting 11th on the TAC Cup ladder are more focused on getting more game time into their players.

Northern Knights take on the Number 1 Geelong Falcons at Preston City oval at 2.00pm. This game is a chance to be an upset with Knights trying to hold that eighth spot. Lewis Taylor who starred in the Under 18 National Championships against Vic Metro with a game high 32 touches is expected to have another great game after last rounds 24 point win over Gippsland Power.