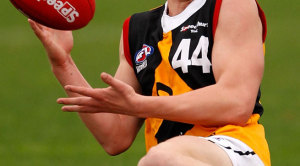 THE Dandenong Stingrays overcame both horrendous conditions and the North Ballarat Rebels to post an important TAC Cup victory at Eureka Stadium on Saturday, as Joel Dwyer reports.

On freezing winter’s day, the visiting Stingrays were too strong over four quarters, prevailing 8.10.58 to 1.4.10.

The visitors managed to extend their lead at the main break to 19 points as a result of a further two goals.

Sam Bennett provided a brief highlight for North Ballarat early in the third quarter, streaming through the middle of the ground to kick a long goal.

However, Dandenong responded by booting the last five goals of the match to run out easy 48 point victors.

Despite the scoreline, North Ballarat Rebels coach David Loader was pleased with his side's endeavour.

"Our effort around the footy was pretty good all day. We just dropped away in the second half in some of our structures," Loader said.

"It was a terrific game of contested footy. They're great conditions to watch two sides go at each other."

Matt Crouch was again clearly best on ground for the Rebels, gathering a staggering 39 disposals in a losing side.

"There's so many lessons to be learnt about how Matt goes about his footy. He's wonderful for our group and we're rapt with the way he's going."

Sam Bennett, Kyle Hendy, Mitch Bowman and Jayden Brennan were also impressive contributors for the home side, but Loader highlighted the need for a more even spread within the team.

"A downside was we had six or seven blokes who had very little influence on the game again, which is something we will definitely need to work on," Loader said.

The Rebels have the bye this weekend before facing Northern Knights on August 17 at Eureka Stadium.