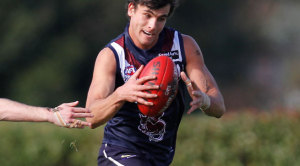 With their finals hopes hanging by a thread, the Sandringham Dragons welcome back a host of key players this weekend, writes David O'Neill

After an interrupted season with a number of players involved in the NAB AFL U18 Championships and various school football competitions, the Dragons sit ninth on the ladder and remain a game and half adrift of the top eight.

But with Nathan Freeman, Max Hayes and Zach Merrett among a bevy of inclusions for this weekend’s must win clash with eighth-placed Murray Bushrangers, the Dragons are plotting a late charge for finals action.

The trio were all among the best for the Associated Public Schools representative side in their clash with the Associated Grammar Schools Victoria last Saturday.

Freeman was particularly devastating with 39 possessions and two goals, while Hayes (26 touches and 12 marks) and Merrett (30 disposals) were more than just contributors.

Despite the Dragons’ precarious position, Talent Manager Ryan O’Conner said they remained confident their best football could rival any other region.

“We still like to think we’re a chance to play finals but obviously it has been a difficult season trying to get some continuity with AIS Academy commitments, Vic Metro and school footy,” O’Conner said.

“But on the flip side we’ve had the opportunity to play 57 players and give a lot of boys a chance to play TAC Cup footy.”

“Two weeks isn’t a lot of time to get the guys playing well together but if we take care of what we can control.. and the footy gods smile on us then hopefully we can sneak in there.”

O’Conner said he was looking forward to seeing the Dragons close to full strength this weekend.

“I think it’s pleasing for the program to get our best kids out there and actually go and play for our local brand and our colours.”

“I think we had about nine or 10 play last weekend in the APS vs AGVS game and you’d love to think the guys who played really well would take that form into this week.”

If the Dragons can overcome the Bushrangers this Sunday at Victoria park, they will then face a do-or-die clash with Western Jets in the final round of the season.

While O’Conner said playing in September wasn’t the only measure of success, it would, however, give his players another chance to impress AFL recruiters.

“For guys like Josh Kelly and Christian Salem, it’s probably noting going to matter as much but for other guys on the cusp that might need a few more opportunities to put their hand up, it’s pretty important,” he said.