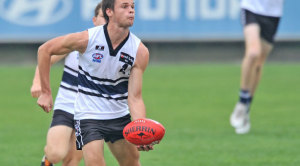 North Ballarat's pressure around the contest was commendable for the majority of the match but their effort wasn't rewarded on the scoreboard, trailing by 30 points at three quarter time.

From there, the fifth placed Knights completely broke the shackles in the final term, outscoring the Rebels by 50 points to run out easy 17.7.109 to 4.5.29 victors.

A highlight of the first half saw an enthralling head to head contest between two highly rated players, Rebel Louis Herbert and Northern's Ben Lennon.

"We wanted to see how Louis would play against a real quality player," Loader said.

"He's had a really good game on a top quality opponent. Today was a massive tick for Louis, I thought he was outstanding."

Northern tall forward Marcus Bontempelli was close to best afield with five goals, highlighting the lack of a focal point up front for the home side.

"Unfortunately we haven't got someone who can kick us four or five goals which we've had in the last few years," Loader said.

"We'll keep developing the young guys we've got and hopefully at some point in time we do."

Despite being disappointed by the final quarter, Loader couldn't fault the effort of his chargers on a tough day.

"For the first three quarters I thought we were really competitive and that's all you can ask for," Loader said.

"You can take a loss if everyone's trying their hardest and we certainly received that for three quarters today, which is a step in the right direction."

North Ballarat will attempt to end their season on a bright note when they meet Oakleigh Chargers at Warawee Park on Saturday, while the Northern Knights remain a top four chance as they face Murray Bushrangers.