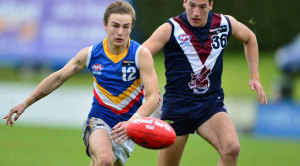 In a cruel twist of fate, Honeychurch broke his left wrist 10 minutes in the first TAC Cup match of the year and was forced to sit out the next seven weeks. The freak injury came on the back of an almost identical injury to his right wrist that cost the promising 18-year-old almost all of his pre-season.

But while most players would be forgiven for cursing their luck, Honeychurch turned his attention to getting back on the field as fit as he possibly could.

Not only did he did he beat the odds to be ready for Vic Metro’s tilt at the NAB AFL Championships, but the 18-year-old hit the ground running.

In four high calibre games, Honeychurch proved he could match with the best midfielders in the country and was rewarded with the Vic Metro Most Valuable Player award.

Averaging a tick under 25 disposals, and winning most of those at the coalface, the 175cm on-baller won plenty of admirers in victories against Queensland, Western Australia and Vic Country, and in a narrow loss to South Australia.

Metro coach Martin Allison described Honeychurch as a competitive beast and highlighted his performance against WA as the highlight of his carnival.

“When the game was in the balance in the fourth quarter, Mitch really came into his own and was pivotal to getting us over the line,” Allison said.

“Although he wasn’t able to train with the group in the lead up to the carnival, Mitch was always seen running and pushing himself to improve his fitness.”

“Despite his size, he is not intimidated by the bigger bodies and is determined to be the best player he can be, which is infectious inside the playing group.”

After missing such a large chunk of the season, Honeychurch said he was just thrilled to get the chance to represent Vic Metro.

“It was obviously pretty shattering to only last 10 minutes in Round 1,” he said.

“I didn’t think too much about Vic Metro when it first happened and just focused on getting fit and trying to get back to playing some good footy with the Ranges.”

“To get the nod for the first match against Queensland was pretty exciting and when we all put the jumpers on together about five minutes before we ran out, it was a pretty special feeling.”

Honeychurch was one of several players from the Eastern Ranges to represent Vic Metro during the Championships, a fact he said made the experience even the more memorable.

“A lot of us started playing footy against each other in the Eastern FL when we were nine or 10… so to run out in the Vic Metro jumper together was something I’ll never forget.”

Honeychurch and his teammates will now turn their attention to the TAC Cup finals, we’re their expected to be one of the teams to beat.

“The Ranges haven’t enjoyed much success in recent years so we’re pretty determined to go as far as we can into the final series and give all those people behind the scenes who do some much work some reward for their efforts.”

The Victoria Metro Academy is proudly supported by Dairy Australia and the Legendairy campaign.