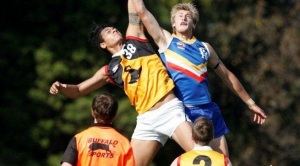 IN a large leap up the ladder from 2012, the Eastern Ranges face top four regulars Dandenong Southern Stingrays in a Qualifying Final.

Chances were always strong that Eastern Ranges and Dandenong Stingrays would go head-to-head in a Qualifying Final before the final home and away game in the TAC Cup played out.

And, that’s exactly how it’s played out although neither Eastern nor Dandenong could be happy with the circumstances that locks together the two clubs.

The Ranges and the Stingrays come into the Qualifying Final attempting to rectify poor performances last week.

Eastern has to put behind them a 47-point loss against Calder, a match where they were completely outplayed in the second half.

Dandenong has to rebound from a 41-point defeat by Geelong, a match where their poor conversion saw them have to wait until the third quarter to score their first goal.

While the strong seasons from both clubs have earned them a double chance, both know the importance and benefit of winning a Qualifying Final and advancing straight to a Preliminary Final.

Although missing its private school students as well as an injury to star Tom Boyd, Eastern had won five in a row before Calder unceremoniously ended that streak.

The Stingrays had put behind them a mid-season slump where they lost four in a row to get back into contention with a series of thumping wins.

They defeated Murray, Bendigo, Sandringham and North Ballarat by margins ranging from eight to 16 goals.

Twice this season Dandenong has gone on five game tears, but, it was dealt a reality check by Geelong. Big time.

The club that puts behind them last week’s loss and gets back to its previous good form will emerge with a win.

This is the third match up between the clubs this season.

Dandenong won the first, back in Round 3, when it posted an eight goal win at Bayswater then Eastern travelled to the Stingrays home and took away a 10-point win.

It could be said that neither team was at its full capacity in either match, but how often does that happen?

More than likely talented players will be missing from the Qualifying Final, but players can’t get caught up in that peripheral stuff.

No doubt that good players can help, but nothing lifts a club more than all its players contributing to the cause not jumping on the coat tails of the more gifted players.

It will be the club that plays as a team not as individuals that will earn the week’s rest and await a Preliminary Final berth.