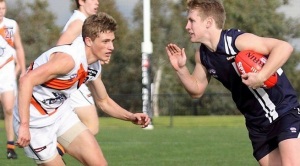 THIS Qualifying Final pairing has made a rapid rise up the ladder this season, with Geelong Falcons and Calder Cannons moving from seventh and eighth to the double chance.

Not that it really needed to, but Geelong Falcons sent a timely reminder to its rivals last week.

And, in particular to Qualifying Final foe Calder Cannons, which jetted into the top four at the last moment thanks to a five game winning streak and Western Jets being shot down by Sandringham Dragons.

When naysayers – unsighted and unheard for virtually the entire season – began to appear in recent weeks to question whether Geelong was the real deal or a pretender, the Falcons set the record straight.

Pitted against Dandenong Stingrays, comfortably sitting third with its own five game winning streak, Geelong let the TAC Cup community know just why it has been the competition trendsetter.

Geelong kept the Stingrays goal-less in the first half – Dandenong’s kicking was woeful, but the bottom line is it didn’t kick its first goal until the third quarter.

And, by that stage the Falcons were on route to an emphatic 41-point victory.

It underscored Geelong’s dominance and that really has been the story of the home and away season.

The Falcons won its first eight games – mostly by large margins – before it inexplicably lost against Eastern Ranges by 18 goals.

It managed two goals while Eastern kicked 20. It was so far off a true indication of the club’s ability.

Call it an aberration, particularly given it fell during the heart of the NAB AFL Under 18 Championships.

Geelong embarked on another four game tear before Northern upset it by seven points in Round 14. And then followed a four point win against Bendigo and a one point loss against Calder.

All of a sudden, talk switched to the Falcons being vulnerable. Ask Dandenong Stingrays players just how vulnerable they found Geelong last week.

So, for the third time this season, Geelong goes head to head with Calder, which has gained momentum in the second half of the season.

The Cannons owned just four wins after the first 10 rounds. Included in one of those losses was a 27-point defeat by Geelong.

But, Calder proved a far more formidable team in the second half of the season.

After Northern inflicted a 51-point defeat on them in Round 12, Calder has been on a roll winning its past five games to lift itself from sixth to fourth.

As mentioned earlier, included in that run was a one-point win against Geelong in Round 16 at Simonds Stadium.

And, to show that was no fluke, Calder last week beat second-placed Eastern by 47-points.

It sets up an enthralling Qualifying Final with a Preliminary Final spot for the victor.

Calder is in grand form, but Geelong didn’t finish two games clear on top without good cause.