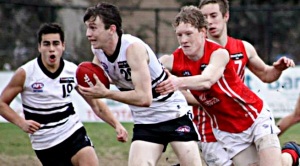 SUNDAY'S Elimination Final between the Northern Knights and Gippsland Power is set to be a thriller as the teams meet for the third time this season, as Justin Jenvey reports.

The two teams first faced each other in round eight with Gippsland winning by 26 points while the Knights were victorious by 35 points in their Round 15 encounter.

Although they finished the home and away season sixth and seven, the two teams head in to the match in different veins of form, with the Knights one of the form teams of the competition late in the season.

After nine rounds the Knights were sitting in ninth place with just three wins to their credit but a strong finish to the home and away season saw them enter the eight and battle for a top four place.

A win last week would have put them in third position on the ladder and given them a double chance, but a narrow three point loss to Murray Bushrangers ended those hopes.

Northern Knights Talent Manager Peter Kennedy says the defeat was disappointing, because it was a game the team could have won.

“We’ve got our backs to the wall now but the boys know they have to perform if they want to keep going,” Kennedy said.

Playing their own brand of football and not allowing Gippsland’s stronger midfield players to dominant will be the keys to a Knights’ victory according to Kennedy.

“We’re not a tall side so we rely on our run and spread, we’ve just got to make sure we run hard, spread as much as we can when we’ve got the footy and play to our strengths,” he said.

“Player accountability is probably something we can keep improving on too, they’ve got a couple of real prime movers (Alex) Carr (Ed) Morris, (Aaron) Heppell so we’ve got to play good accountable football.”

Although Gippsland won last week they have had a tough finish to the season losing five of their last six matches, three of those by less than two goals.

Despite the losses the fact that the Power faced the top three teams over the last six rounds has coach Nick Stevens confident that his side will be well prepared for finals football.

“I think our side’s played some really good footy but we haven’t quite got the results we would have liked,” he said

“We’ve had some real close games and it’s been pretty well documented that we’ve had a lot of injuries during the time but I think the last few weeks will help in terms of this week’s game.”

After the heartbreak of last year’s Grand Final, challenging for this year’s premiership is going to be a challenge to repeat but is a motivating factor for Gippsland’s top aged players.

“The boys that played last year they are still hungry from last year’s one point loss and they’re hoping to go as far as they can,” Stevens said

“You obviously want to win finals and go as far as you can because it’s great exposure for the kids.”

“We’ll concentrate on ourselves and playing our style of footy and if we can play the way we want to play the results will take care of themself.”