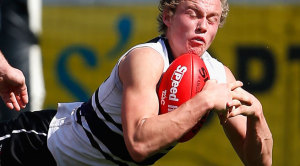 The Northern Knights have powered in to semi-final week after defeating the Gippsland Power by 58 points at Visy Park on Sunday, as Justin Jenvey reports

The Knights were never seriously challenged after a tight first quarter, triumphing 15.17.107 to 7.7.49.

In breezy conditions, both teams struggled with their skills but Northern adapted best, finding their grove in the second half to use the wide-open spaces of Visy Park to their advantage.

For the victors Bill Murphy’s run and carry was a key, Ben Lennon was prominent all over the ground gathering 25 possessions and booting three goals, while Josh Iacobaccio was brilliant in defence.

For Gippsland it was Lachlan Channing and Josh Cashman who led the way, Channing with 20 disposals and Cashman with 17.

Gippsland ruckman Jack Leslie was dominant early but his midfielders couldn’t get their hands on the footy as the Knights took control of the stoppages.

Liam Bowkett got Northern on the scoreboard first after some clever work from Jake Kalanji and they had their second soon after when Kyle Langford scored from the goal square.

Poor kicking from the Knights and an Alex Carr goal from the boundary line meant the difference was only nine points at quarter time.

The Knights were more direct in the second term and took advantage of their opportunities to kick five goals to Gippsland’s two and take a handy 28 point lead at the main break.

They got their first of the quarter when Jayden Short pounced on a loose ball and then immediately followed it up with another as Marcus Bontempelli took the ball from the centre and goaled from 50.

Later on in the term, Northern again scored goals on consecutive plays, first after some great defensive pressure from Short and Kalanji and then when Jacob Smith broke from the centre and sent his first goal through.

Gippsland looked a different team after the break as Aaron Heppell and Carr led the way, however, they failed to score with two great chances.

First a Power player was run down in the goal square and shortly after Alex Saunders missed everything after playing the advantage from a free kick.

Gippsland did finally get some reward, Saunders converted a set shot after Paul Pattison found him 35 metres out directly in front and then Carr unloaded from 55 to give the Power two goals in a minute.

All of a sudden Gippsland had the momentum as the intensity of the game lifted but as good teams do, the Knights were quick to respond.

The game opened up in the final quarter as Northern found themself with plenty of space and run as Ben Lennon and Josh Turner ensured the Knights kept their foot down.

Northern put on six goals to Gippsland’s two in the final term, to comfortably ensure a semi final matchup with Eastern Ranges.