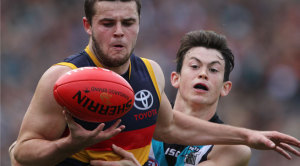 THE top honour might have gone begging yesterday but it’s still been a stellar season for TAC Cup graduates in the AFL.

The classy midfielder was a clear winner on 44 votes, 13 ahead of Adelaide’s Brad Crouch.

Crouch (North Ballarat Rebels) was the leading former TAC Cup player, making an immediate impression on the AFL in his debut season with the Crows. The hard-nut was selected in the GWS Mini Draft for 17-year-olds in 2011 but was ineligible to play in the Crows' senior side last year due to his age.

Port Adelaide’s Ollie Wines, a Bendigo Pioneers export, was third on 26 votes after playing an important role in the Power’s climb up the ladder this year.

Wines starred with 24 disposals in his Round 1 debut to secure the first NAB Rising Star Nomination of 2013.