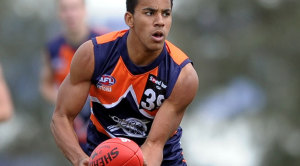 THE Calder Cannons are staring down the barrel of a straight sets finals exit in this Sunday’s blockbuster with the Western Jets, writes Justin Jenvey

The Cannons’ season, full of promise just a week ago, will go on the line at Visy Park in a semi-final billed as a 50-50 contest.

The Cannons and Jets have one-win apiece from their two encounters this season, with both games decided by less than a goal.

The Cannons were taught a lesson by premiership favourites the Geelong Falcons in the qualifying final, despite entering the match on the back of a five-game winning streak.

With a two-point quarter time lead, the Cannons looked headed for a sixth consecutive victory but were overpowered by the Falcons to eventually fall by 40 points.

Calder coach Andrew Jago said his team would need to improve significantly to overcome the Jets this week.

Jago said the Jets were a dangerous team and playing extremely well under the guidance of coach Torin Baker.

“They’re well drilled and they’re probably the most skilful Western Jets squad for several years and we respect them immensely.”

For the Jets, a win and appearance in a preliminary final would be the furthest the team has advanced in the TAC Cup finals for more than a decade.

A loss on the other hand would be the same finish as the team’s 2011 season.

The Jets enter the match full of confidence after running over the Murray Bushrangers to clinch a nine-point victory in the second elimination final.

Despite being 15 points down at three quarter time, the Jets proved their fighting spirit to steal the lead late in the term and advance to the semi-final.

After conceding seven goals in the first quarter, the Jets defence locked down, only allowing the Bushrangers two more for the match.

Their defence will again be pivotal against a Cannons’ side boasting several dangerous forwards.

The win over Murray was the 12th time this season the Jets had played in a match decided by less than 18 points, and it’s a fact Coach Torin Baker said helped to his side get over the line.

“The group has been involved in many close games during the course of the year so we’ve got a lot of experience to draw upon and when you’ve had those experiences and you come to a final, the boys certainly knew what to do and how they needed to execute the final quarter,” he said.

“It’s a great rivalry that we’ve developed between us and Calder, they’re a really good hard running team and both teams really play the game in a spirited way. It could go down to the wire again.”