Ranges and Knights in cut-throat semi 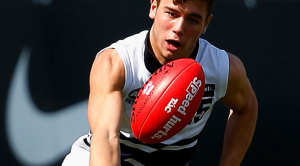 The Eastern Ranges will be hoping to bounce back from a disappointing qualifying final loss when they take on the Northern Knights on Sunday, as Justin Jenvey reports.

The Ranges’ first finals appearance since 2009 could be decidedly brief if they are unable to recapture the form that saw them become one of the competition's most formidable outfits during the home-and-season.

A 34-point loss to the Danendong Stingrays in week one of the finals has left the Ranges in a precarious position and facing the distinct possibility of being bundled out of the finals by the rampaging Knights.

The Ranges were left to lament an uninspiring first half against the Stingrays in a performance coach Darren Bewick said he would like to forget.

“A lot of our boys probably had their worst days for the year and it just came at the wrong time,” he said.

“But credit to Dandenong, they were pretty good during the day and just gave us a little bit of a reality check that shows you have to be doing everything right to be successful at this time of year.”

“That’s probably one thing about this group, they’ve been pretty resilient this year and have bounced back well from poor performances throughout the year,” he said

The Knights on the other hand go in to the semi-final full of confidence on the back of a 58-point win over the Gippsland Power.

The Knights proved their premiership credentials with a dominant final term that put an end to the Power’s season.

Coach Marco Bello said his side had been coping with the pressure of having their season on the line for weeks.

“We didn’t get off to a good start to the year so every game from probably 10 weeks out has been pretty much a final for us. We’ve taken that sort of mind set in to every game,” he said

“We said to the boys they don’t have to do anything extraordinary because we’ve been doing it for the past 10 weeks.”

The semi final match up will be the team’s second meeting this season with the Ranges comfortable victors in Round 4.

However, the Knights were without three of their more important players, Ben Lennon, Bill Murphy, and Marcus Bontempelli at the time.

“We haven’t played them since round four and our side obviously personal wise and also the way we’ve been playing has changed considerably,” Bello said.

They’re three great ins but we just need to be on our game and worry about what we can control, having the side play their role whoever it is,” he said.