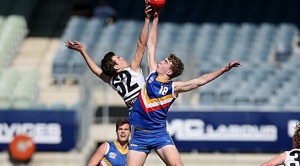 Eastern Ranges bounced back from a disappointing loss to the Dandenong Stingrays by defeating the Northern Knights last Sunday.

If the solid crowd at Visy Park forgot how good Darren Bewick’s side could be, they were given a swift reminder with a fast flowing game that saw plenty of scoring, as Peter Williams reports.

Despite missing Mitch Honeychurch and Tom Boyd as they have throughout this year’s finals series, the Ranges were dominant for much of the match and looked a totally different outfit to the one that fronted at Visy Park for a Qualifying Final eight days earlier.

Eastern’s forward line potency was back with the likes of Christian Petracca, Michael Apeness and Matt Traynor all lively, making life hard for the Northern Knights’ defenders.

The game opened up early with Eastern booting four of the first five goals thanks to the inside work of Ben Cavarra, the outside poise of Mitch Keedle and the dangerous forward line that was rarely missing a beat.

After defeating Gippsland Power in a thumping win the week before, Northern had one less day’s break but it could hardly contribute to the loss with the likes of Jake Kalanj and Billy Murphy showing plenty of toe.

Josh Turner and Matthew Haynes were getting their fair share of the ball while Marcus Bontempelli was able to provide a forward target with some strong grabs inside forward 50. Unfortunately for the Knights, they couldn’t quite produce the accuracy of the Eastern Ranges, and it was hurting them badly.

Despite Eastern Ranges seemingly controlling the contest, Northern were able to stay within a three goal margin for just over a half before Apeness kicked two of his three goals for the game and quickly the margin jumped out to over five goals near the end of the third quarter.

The last quarter was a high scoring one that saw nine goals kicked between the sides, but the Ranges had already established a match winning lead, despite Northern reducing the final result to just 19 points by the final siren.

For Eastern Ranges they go onto face Geelong Falcons next Saturday with regained confidence and plenty to learn from this game. Christian Petracca and Michael Apeness both booted three goals while Ben Cavarra, Mitch Keedle and Connor O’Sullivan all had patches of brilliance throughout the match. Daniel Nielson did well at full back while Trent Cody was good early coming off a wing.

Unfortunately for the Northern Knights, the loss meant that they now look to season 2014 with plenty to take from 2013. Despite having one more scoring shot, they booted 10.17 which ultimately cost them. Liam Hunt was impressive across the middle of the ground while Marcus Bontempelli looked dangerous up forward. Sam Switkowski and Jesse Tardio were among the best while Billy Murphy will be one to watch in 2014.