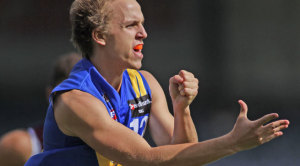 ASPIRING players from all across Victoria, from a raft of different competitions, will showcase their talent in the annual AFL Victoria Young Guns match on Sunday at Port Melbourne.

As well as all the above-mentioned, there’s a swarm of players with VFL and TAC Cup backgrounds.

And, the Young Guns match includes those members of the VFL Academy who are fit and not involved in the Peter Jackson VFL Legendairy finals.

VFL Academy coach Darren Flanigan said the response to the Young Guns match had been remarkable with 162 player nominations.

Invitations are distributed to AFL, VFL, TAC Cup, VAFA , metropolitan and country league clubs asking them to submit players for consideration for the match.

“The players that get the most nominations gain the invitations,” Flanigan said.

Flanigan said from that initial list there had 81 acceptors, but injury and finals commitments had seen that number reduced to the final squads for the weekend’s match.

He said there had been no age restriction placed on who could play in the Young Guns, but the emphasis is on the ‘younger’ players.

“The majority of players are TAC Cup players and first and second year VFL players with a sprinkling of players from the country,” Flanigan said.

Flanigan said some VFL Academy members like Frankston’s Leigh Kitchin, who topped the Dolphins voting in the J.J. Liston Trophy, had sufficient exposure that they didn’t need to play in the Young Guns match.

But, Flanigan said for those Academy players who for one reason or another had not been able to gain many senior games, the match offered them just a further opportunity to showcase their talent.

Former Carlton/North Melbourne/Northern Bullants/Box Hill Hawk Digby Morrell, who currently coaches Strathmore in the Essendon District Football League, will coach one team with ex-Western Jet Adam Skrobalak, who has been helping out with Port Melbourne and the Jets, coaching the other side.

Players underwent a fitness test/training session on Tuesday before training together in their representative squads on Thursday.

Flanigan said it’s hoped that those players who perform well in the Young Guns game can secure an invitation to a AFL Draft State screening or even the AFL Draft Combine.

View the team lists below