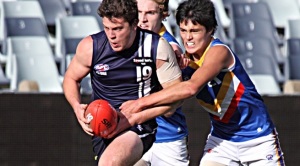 ANTICIPATION surrounds whether this year’s likely No.1 draft pick Tom Boyd is set to make a timely return from injury for the Eastern Ranges in this weekend’s TAC Cup Preliminary Final clash with the Geelong Falcons, writes Brad Green.

The 199cm key forward has not played since he hurt his ankle three months ago during the AFL under-18 national championships.

But there’s speculation Boyd – who has booted 23 goals in five appearances for the Ranges in 2013 – has overcome the problem and he has been named against the Falcons at Carlton’s Visy Park as both sides chase a berth in the Grand Final.

Falcons coach Andy Allthorpe said his side is preparing for Boyd to play.

“If Boyd is not available then I don’t think much will change with their line-up structurally. They generally go with two tall forwards.”

Allthorpe said the task of minding the 102kg Boyd would go to Fraser Fort, who this week was named at full back in the TAC Cup Team of the Year.

“Frase will have a big job either way on one of their key forwards (if Boyd doesn’t play),” Allthorpe said.

“He’s certainly a very important player to our side because of his flexibility, but more so at this time of year to play on the big players in the big games. He focuses about the job at hand and goes about it to the best of the ability.”

A strong performance by Fort will also be a boost to his own national draft prospects.

“These are the key games that can make or break you,” Allthorpe declared. “(But) Frase loves the challenge of playing on the good players.”

“But generally we’ll back our structures and our overall team versus individual players.”

The match pits the competition’s best attacking side – Eastern – against the best defensive team – Geelong.

The Falcons conceded an average of 56 points a match during the regular season and kept the Calder Cannons to just 49 in their Qualifying Final win a fortnight ago.

The Ranges have plenty of scoring power with five players who have kicked more than 20 goals for the season.

Whereas the Falcons’ leading goalscorer is Scott Dixon and Matthew Boag – who hasn’t played since mind-season - with 19 each.

The Ranges embarrassed the Falcons in their only meeting of the season by 108 points down at Simonds Stadium in mid-June, holding them to their lowest ever score.

But Allthorpe said the Falcons will have a completely different looking line-up this weekend.

“We’ve got about 15 guys who didn’t play that day. But we’re still well aware of what they’re capable of,” Allthorpe said.

“A lot of water has gone under the bridge since then and we’re feeling as best prepared as we can be for the Preliminary Final.

“There’s definitely a buzz around the club. All the players are excited about the challenge of playing Eastern. They’re all keen to take on a team that’s been the best stoppage and best contested ball side in the competition all year.”

The Falcons are chasing their first Grand Final berth since their last premiership in 2000 while the Ranges haven’t been in the season decider since 2004.

Allthorpe said while everyone knows what the reward is for winning on Saturday, the coaching staff is not using that as part of their preparations.

“We’ve got to narrow our focus on what we can control and what we want to be good at,” he said.

“It’s all about what you can produce on the day and that’s all we’re focusing on. It’s about getting ourselves up and going for that first quarter.”

The match gets underway at 2pm.