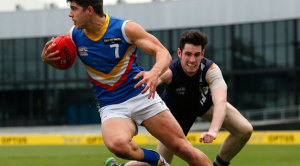 The Eastern Ranges have caused the upset of the finals series, outgunning the highly fancied Geelong Falcons to run out 37-point winners, as Peter Williams reports.

A powerful final term saw the Ranges put an end to the Falcons’ season and book a spot in Sunday’s Grand Final.

Despite leading comfortably at the final siren, the scoreboard failed to reflect the intensity and close nature of the game, with the Ranges leading by just 11 points at the final change.

The match was a high scoring affair with 28 goals kicked between the teams, both forward lines finding space and converting on a regular basis.

Christian Petracca was the star for the Ranges with five goals, while Matthew Traylor (four) provided valuable support.

Hugh Goddard (three) and Patrick McCartin (three) lead the way for Falcons, who failed to match the Ranges’ intensity for the full four quarters.

Ranges duo Tom Boyd and Mitch Honeychurch failed to prove their fitness in the lead up, helping even the ledger with the Falcons also missing two of their prime movers in Lewis Taylor and Darcy Lang.

In their absence it was up to others to stand tall.

For the Falcons, Teia Miles, Samuel Russell and Billy Beardsell were busy, while for Eastern, Nick Evans, Connor O’Sullivan and Morrish Medallist Ben Cavarra were among their best.

After a tight opening term, the Ranges booted four goals-to-two in the second term to take a 13-point lead into the main break.

James Belo was working hard on the outside while Christian Petracca was getting the better of Fraser Fort, forced to take over after fellow Falcons defender Darcy Gardiner left the field injured.

By the time Gardiner returned, Petracca had kicked four goals and had give his side the confidence he needed.

For Geelong, Joe Maishman was showing his class through the middle, combining with Reid Adams and delivering it lace out to Goddard and McCartin.

But it was the Ranges who made their most of their opportunities and with the likes of Daniel McStay, Jordan Walker, Aaron Bond and Joseph Fisher starring across half back, they soon had the ascendancy.

After such a promising season, most in attendance expected a Falcons surge in the final term but instead it was the Ranges who hit their straps.

With a dominant display they were able to finish comfortable winners and book a spot against the Dandenong Stingrays in next Sunday’s Grand Final.

The expected return of Honeychurch and Boyd could see the Ranges start favourite for the premiership decider, and reverse the loss suffered at the hands of the Stingrays in the qualifying final.

While disappointed not to progress, the Falcons could take heart in the knowledge that a number of the better performers are still eligible for next year.

The likes of Goddard, McCartin, Maishman and Jackson Nelson should see the Falcons again be a contender in 2014.