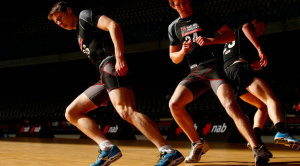 It’s so often said that football is a brutal business. Well, so too is the audition process.

After a long season, and many years spent dreaming of a career at the elite level, the TAC Cup’s best players this week have faced one final test.

“It is a long week but you have to make the most of it and just do your best.”

Speaking after clocking an impressive 14.4 in the infamous beep test, Bourke said it was important to handle the pressure well.

"There is obviously a lot of attention with AFL clubs watching on from the stands, but once you get out there you just have to block it out and go your hardest.”

While Dandenong Stingrays gun Billy Hartung would eventually set a new record for the beep test with a score of 16.6, Bourke said he was happy with his own performance.

“I was happy with 14.4 it’s almost a full level above my personal best so it’s good to be able to do a PB at the Combine.”

Regarded as an elite kick, Bourke was also one of the better performers in the morning’s kicking, clean hands and goalkicking tests.

“Kicking is probably my strength so it was good to come away with a solid score,” he said

In and around an array of physical, mental and medical tests, players are also subjected to interviews with AFL clubs, keen to know more about the young men they are recruiting.

While questions can be sometimes come from left of centre, Bourke, a grounded country boy from Noorat in south west Victoria, said he hadn’t faced anything yet that had caught him off guard.

“Speaking to some of the other boys, they’ve had a few unusual questions, but I suppose I’ve been a bit lucky and haven’t had anything too weird.”

The Combine will conclude today with the 3km time trial, another exhausting obstacle and another chance to impress.