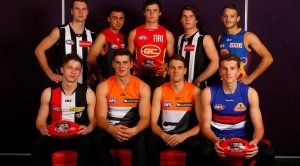 For the third year in a row, a TAC Cup player was the first name read out on draft night, with Eastern Ranges' forward Tom Boyd surprising no one as he was chosen by GWS Giants. Boyd joins previous number one selections Lachie Whitfield (Dandenong Stingrays - 2012) and Jonathon Patton (Eastern Ranges - 2011) at the the Giants in 2014.

The Sandringham Dragons led the way with six draftees - three of those picked in the top 10.

2013 TAC Cup premiers Eastern Ranges and the Oakleigh Chargers were both not far behind with four selections each - with former Charger Luke McDonald also picked up by North Melbourne under the father/son rule, after McDonald chose to play the season with Werribee in the Peter Jackson VFL having still been eligible for the TAC Cup in 2013.

See the full list of TAC Cup selections below: