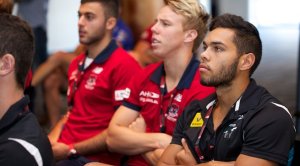 Over 100 of the AFL’s brightest new talents – including 38 draftees from TAC Cup regions - travelled to Etihad Stadium earlier this week to be welcomed into the AFL system by their representative body, the AFL Players’ Association, as part of the 2014 AFL Players’ / AFL Induction Camp.

The camp, entering its 14th year, saw draftees briefed on a number of topics including the importance of wellbeing, career development, financial education, respect and responsibility, decision making, illicit drugs and gambling and an education session about the AFL Players’ charity, Ladder, which helps tackle the issue of youth homelessness.

With players from all 18 clubs in attendance, the two day Induction Camp also provided players with the opportunity to gain an insight into the AFL system from recently retired stars, Sydney Swan Jude Bolton and former Hawk Max Bailey.

Bolton, who was awarded the 2013 Madden Medal, said players need to understand the importance of engaging in off field development and preparing for life after footy as soon as they enter the system, as their careers won’t always turn out how they had planned.

“Statistics show that only a very small number of players will be lucky enough to have a 300 game career, and the number keeps decreasing” said Bolton.

“These boys need to be prepared for life after football and the best way to do this is getting involved in off-field development right from day one.”

Having suffered three knee reconstructions in his 43 game career, he said having a passion outside of football was crucial to help cope with the mental challenges he faced during the setbacks in his career.

“When I entered the system I certainly didn’t think my career would go the way it did, but it made me realise the importance of having something outside of footy to turn to,” said Bailey.

“No matter who you are you will experience setbacks, both during your career and in life in general, so you need to learn to be able to cope with these challenges and having a balanced outlook definitely helps with this.”

“There’s no doubt hearing the messages from guys like Jude and Max carries extra weight with these young men,” said Johnson.

“They need to understand that footy isn’t forever, the average career is about five years and it’s a cut throat industry so you need to have a balanced life and begin planning for life after footy almost as soon as you enter the system.

“We have strong support services that continue to grow and we want these men to take advantage of these opportunities as early as possible within their career.

“Whether they use their education and training grants to pursue a university qualification like Jude Bolton, or take advantage of the financial advice services which are presented by former players Brad Wira and Mark Porter, it is important they know that the Players’ Association is here to support them and all of these benefits and entitlements are due to the hard work of players who have gone before them.”

The camp – run on Monday and Tuesday this week - included the AFL delivering education sessions on respect and responsibility, illicit drugs and gambling, vilification and discrimination and anti-doping, on the final day of the camp.