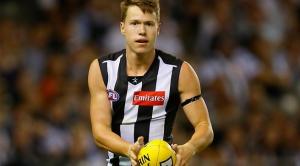 Despite the Magpies' heavy defeat at the hands of Fremantle in the season opener, Langon was one of the positives to come out of the match.

Speaking to collingwoodfc.com.au after the game, Langdon said he did have pregame nerves before his debut.