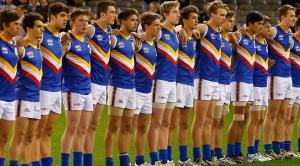 The Eastern Ranges will enter season 2014 of AFL Victoria’s TAC Cup competition as the hunted, after completing a rags to riches rise up the competition ladder to claim the 2013 premiership.

The Ranges entered 2013 coming off their most disappointing season in the clubs history, finishing 2012 in bottom spot with only three wins and no draftees.

Fast forward to the end of 2013, and the club had claimed its second premiership defeating Dandenong Stingrays by 112 points, congratulated its second Morrish Medallist Ben Cavarra and for the second time in three years was home to the NAB AFL number one draft pick, with Tom Boyd joining former Ranges player Jonathon Patton as another prized number one selection at GWS.

Boyd was one of four players drafted from the premiership side, joining Michael Apeness (Fremantle), Mitch Honeychurch (Western Bulldogs) and Daniel McStay (Brisbane) in the AFL.

Darren Bewick enters his fifth season as Eastern coach, and will be the longest serving coach of the 2014 crop after the departure of Dandenong’s Graeme Yeats who spent 10 years at the helm of the Stingrays.

Reflecting on 2013, Bewick said it was a fantastic year both for individuals and the club.

“To get the result in the end was fantastic for the region and for our club. More importantly to get four players drafted to the AFL was a great result and that is what we are there to do, try and develop players as much as we can,” Bewick said.

“A number of the players that were on the list last year are now with VFL clubs and that is something we encourage as well.”

Bewick believes the finals experience given to a number of first year playes will hold them in good stead for this year.

“We are hoping the second year players can be role models to the next crop of players coming through.

“We will have four or five players that played in the premiership as regular players this year.

“Any experience of playing in finals is a great experience, and hopefully that will hold them in good stead for this year.”

The leadership team for the Ranges was announced at their Jumper Presentation night on Monday, with all five players’ part of their premiership team. Luke Hannon will lead the club as captain, Christian Petracca is vice, with Matthew Traynor and Daniel Nielsen named deputy vice captains.

All four players Bewick named as ones to watch in 2014, and have been invited to train for the Vic Metro preliminary squad.

“Christian Petracca is a very strong forward type who will go through the midfield this year.

“Daniel Nielsen is a key defender we think will develop. Luke Hannon and Matt Traynor are two midfielders we hope will develop throughout the year.

Eastern open their season this Sunday at Visy Park against Sandringham Dragons at 1:30pm.

Eastern Ranges ... at a glance: