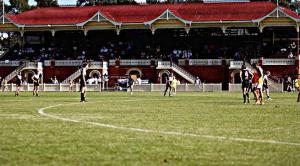 This weekend the TAC Cup celebrates Country Round with all six TAC Cup country teams playing at the magnificent Queen Elizabeth Oval in Bendigo. It promises to be a cracking day of football with the best young talent from far and wide on display.

For the players stepping out on to the field today, it’s been a long journey. To make it to the elite level, aspiring country footballers have to develop a high level of resilience, as they face a myriad of challenges along the way.

Just getting to training can be difficult due to the vast distances they need to travel. In some cases players need to leave school early to make it to training on time.

While younger students might think that missing school for footy sounds like a dream come true, the reality for VCE students is that they then have to work that little bit harder to stay on top of things. Studying in the car or on the team bus becomes a regular occurrence.

The sacrifices made by country players are matched by their families, with mum and dad’s taxi regularly clocking up the miles. Quite often the forgotten heroes, this support provided by parents is invaluable to the TAC Cup competition.

One man that has seen his fair share of country footballers is AFL Victoria High Performance Manager Leon Harris. Each year Leon gets an up close view of the best of the best, the Victorian Country squad selected for the NAB Under 18 Championships.

Harris has observed similar characteristics in country footballers over the years, with honesty and a willingness to listen and learn clear standout qualities of the country lads.

Being recruited by an AFL team is tough, and for country kids it can be even tougher. Harris acknowledging that being able to “consistently train at a high intensity” isn’t easy for them. This isn’t due to lack of willingness to work hard by no means, it’s more to do with logistics.

For the country clubs, when your region to select players from is almost the size of a small European country, being able to bring all of your players together on a regular basis is a logistical challenge.

Due to practicality reasons, full squad training sessions make way for smaller regional based sessions. Instilling game plans and working at high intensity in these small groups becomes that little bit harder. It becomes even tougher when your opposition is training all together three to four times a week.

But while there are disadvantages, Harris says the AFL clubs see plenty of advantages when recruiting country players. “Country players know that they have to relocate to play AFL, so being drafted by an interstate club isn’t as daunting for them.”

AFL clubs also like the laid back personality that young country draftees tend to bring into the club. Just this week North Melbourne coach Brad Scott spoke on radio (1116SEN) about how highly he rated country players and their work ethic.

“The crowds each year are massive, especially with the U16 matches as part of the Country Round as well.

“It is an enjoyable weekend to see some of the best under 18 country talent from across Victoria play on the one day, and it is fantastic promotion for Bendigo itself.

“There are always plenty of return visitors from those that may be experiencing the region for the first time.”

Over the years the TAC Cup country clubs have been tough and uncompromising on the field, and a big part of their community off the field. All of this will all be on display Saturday as Bendigo embraces Country Round and hosts its fellow country clubs.