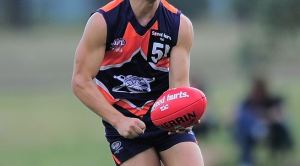 This weekend Calder Cannons will host the North Ballarat Rebels on ANZAC Day.

The two teams will be playing for the inaugural ANZAC Day Cup, with both clubs looking forward to starting a new tradition of playing against each other on this very special day on the Australian calendar.

The Cannons will host a special post match function in the Highgate function room, with all families and supporters from both teams welcome to attend.

The day will hold special significance for Calder, as last June the club was saddened to hear of the loss of one of its 'graduates', when Corporal Cameron Stewart Baird was killed while on active duty in Afghanistan.

Corporal Baird played for the Calder Cannons, under legendary coach Robert Hyde, where he counted Paul Chapman, Jude Bolton and Ryan O'Keeffe amongst others as his teammates.

Corporal Baird was posthumously awarded the Victoria Cross (the 100th recipient of the award) earlier this year.

According to the Defence Force’s official citation, Cameron Baird died how he lived - at the front, giving his all with no hesitation or indecision.

At the time that the award was announced, Calder Cannons Talent Manager Ian Kyte, said that “it really brought home to our kids last year that footy is just a game and we’re lucky to live in this country.”

This season the Calder Cannons will name their ''most courageous player'' award after Corporal Baird, a small gesture but a fitting tribute which “will keep him in the minds of everybody at the club,'' Kyte said.