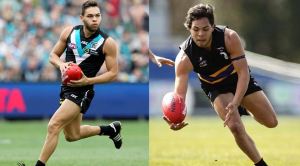 Impey, the sixth former TAC Cup player to gain a rising star nomination this year, was selected by Port Adelaide at pick 21 in the 2013 NAB AFL Draft.

He played junior football for the Shepparton Swans before joining the Bushrangers in the TAC Cup, and was also part of the AFL Victoria Kick Start program for junior indigenous footballers.

Impey represented Vic Country in the 2013 NAB AFL Under-18 Championships, was a member of the 2012 AIS-AFL Academy – Level One squad and was also part of the inaugural Laguntas Program

The rising star nomination came after the small utility played a crucial role in the Power’s 18- point win over Fremantle last Saturday by restricting Hayden Ballantyne to just nine touches and keeping him goalless.

The 18-year-old debuted in Round One and has played every game this season. He has played forward on occasion and kicked two goals.

In just eight games he has shown his pace, great foot skills and hardness at the ball.

“It’s just fantastic to see, he has exceeded all expectations already and will continue to grow and develop as a player,” Ogier said.

With a cheeky and fun loving personality, Impey was well loved by all at the Bushies, but it was Impey’s speed, power and overall athleticism that really stood out to Ogier.

At the 2013 NAB AFL Draft Combine Impey recorded the fastest reaction time and was second in decision-making speed.

A truly versatile player, Ogier knew that wherever he used Impey, be it in the middle, on the wing or up forward, he would have an impact with his exceptional ball handling skills.

“From the start of the pre-season in Dubai until now he’s really earned the trust of his team mates and he’s playing really strong footy,” he said.

“He’s a real competitor and the very best competitors are the ones that want to win the most but they also understand how much hard work they have to do to be good.”