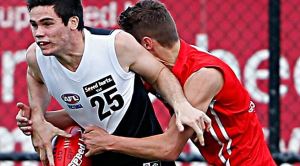 When North Ballarat Rebels Talent Manager Phil Partington, describes Will Austin as an “incredible young man” it is not a throwaway line.

When you consider what Austin, a Year 12 student at St Patrick’s College Ballarat, has accomplished already, and just as significantly plans to achieve, Partington’s call is unerringly accurate.

Austin is an outstanding young man from the Gunditjmara people, who has immersed himself in a bunch of projects - all with the recurring theme of helping others.

He was one of 13 people across Australia to win a Jim Stynes Scholarship; he’s completing a traineeship in community services with the City of Ballarat Youth Services; he’s a Board member of Headspace, a local youth support service and he’s joined the Victorian Aboriginal Community Controlled Health Organisation to share insights and help inform workers about the needs of young people.

One of the objectives of the camp was to start up a campaign. Austin, along with five others, embarked on tackling the topic of youth suicide prevention.

While he stressed he isn’t trained to help anyone with mental health conditions or who is suicidal, Austin said he and the group is willing to be there for anyone in a time of need.

“Our message is that a meaningful conversation can save a life,” Austin said on ‘TAC Cup Future Stars’.

“I’ve got the pressure on me now to keep my community involvement up and doing what Ricci Marks would like for me to do,” Austin said on ‘TAC Cup Future Stars’.

“It’s my passion, it’s what I love doing. Everyone does have a purpose and everyone will find their passion eventually and they will realise how easy it is to do things that you are really passionate about.

“I encourage youth to stand up and speak their voice and get their message out there, whatever they want to change in the world.”

Given his natural instinct to help others, it’s no surprise that Austin has joined the Glenlyon fi re brigade after hearing that they were short on young volunteers.

Along from all his selfless passion to help others, Austin is a talented footballer and understandably thrives in the team environment.

Austin, who is also playing school football with St Pat’s, played his first TAC Cup game for the season last weekend and was a solid contributor in the Rebels 20-point win over Gippsland Power.

Partington noted that the 17-year-old is the quickest player on the club’s list, running 2.83 for 20 metres. To put that in context, his time would put him in the top three for the 20 metre sprint at last year’s NAB AFL Draft Combine.

An outstanding young man off the field, the Rebels are looking for Austin to continue his development on field and be a significant contributor in the second half of the TAC Cup season.