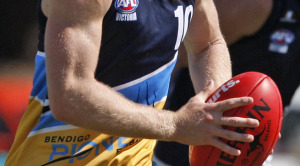 It will be a big Round of TAC Cup action this weekend, with a number of regional areas being given a taste of AFL Victoria's TAC Cup competition.

For the first time in three years the TAC Cup will travel to Mildura this weekend as the Bendigo Pioneers meet the NSW/ACT Rams composite side.

With just one win so far this season against Nth Ballarat in round 3, the Pioneers will be keen to record win two against its interstate rivals.

Bendigo have a tough run home facing four of the top six teams in the second half of the season. They will be without one of last week’s top performers Billy Evans due to Vic Country duties this weekend. Their top goal scorer from last week, Fergus Payne who booted two goals should be available along with Tom Cole, Daniel Davie, Cameron Barrett and Jordan Mangan who were among their best in round 8.

The Rams have yet to record a win in the TAC Cup from three attempts. They will be keen to try and turn this around in Mildura this weekend.

After losing the first three matches of the season, the Western Jets have been on a roll winning their last five. The Jets are sitting third on the ladder and will be looking to keep their winning streak intact when they take on seventh placed Geelong Falcons. The Falcons have had an up and down season so far with four wins and three losses, two of those losses coming in the last two rounds.

Coming off back to back defeats, the Jets secured a come from behind win last round against the Northern Knights, coming back from a 22 point deficit early in the last quarter.

The Falcons are coming off two big losses at the hands of the Calder Cannons in round 7 and they suffered a 43 point loss to the Eastern Ranges, both top four teams, last week. This week’s team will also be minus its Vic Country representatives, including last week’s goal kickers, Teia Miles and Rhys Mathieson and best players Jackson Nelson and Darcy Parish.

The Western Jets should be looking to consolidate their place in the top four whilst the Geelong Falcons will be trying to regain some form heading into the middle of the season.

The Murray Bushrangers, who are sitting eighth on the ladder face a tough task hosting ladder leaders Oakleigh in Wangaratta this Saturday. Both the Bushrangers and the Chargers will be looking for a third win on the trot, although the consistent Chargers should head into the match as the favourites. The Chargers have only stumbled once this year, in round 6 against the North Ballarat Rebels by three points.

Joshua Schache will be missed by the Bushrangers after his four goal contribution in last week’s two point victory over the Sandringham Dragons. He will be playing for Vic Country against South Australia instead.

The Bushrangers will still have at their disposal Brody Webster, Dylan McDonald, Mitch Mahady and Isaac Muller who have been consistently amongst their best.

The top of the ladder Chargers will have the services of last week’s top scorers, Toby McLean, Lachlan Waddell and Liam Kinsella in their country clash.

Gippsland will aim to try and keep in contact with the top eight when they meet second placed Calder Cannons.

With their only win for the season in round 3 against the Murray Bushrangers, they will be desperately looking for another victory.

The Power will have to improve on last week’s performance against Nth Ballarat, where poor decision making proved costly.

In contrast the Cannons have only lost once this season, to the Northern Knights in round 2 and although they will be missing last week’s best on ground performers in Peter Wright, Paul Ahearn and Matthew Goodyear due to Vic Metro duties, they will still have their round 8 leading goal kicker, Hisham Kerbatieh who bagged five in the team’s 27 point win over the Bendigo Pioneers.

Gippsland’s top scorer from round 8, Ash Di Cero has been named in this week’s line up along with Alex Carr and Jack Hammond who were among the best on ground last week.

The Nth Ballarat Rebels will be looking for four wins in a row whilst the Sandringham Dragons will be looking to break a two match losing streak in what could prove to be one of the more interesting matches on this week’s fixture.

Nth Ballarat will be without Darcy Tucker and Daniel Butler who have both been called up for the Vic Country team, although, last week’s top goal scorers have all been named.

The Rebels wasted multiple scoring opportunities last week, kicking 9 goals and 19 behinds against Geelong Power, a score line they will have to improve upon this week against the fifth on the ladder Dragons.

In their round 8 clash with the Murray Bushrangers, the Dragons clawed back from a 48 point deficit at half time to go down by two points at the final siren. They put eight goals on the board to just one from the Bushrangers in the second half.

They have named Guiliano and Wallace who kicked 3 and 2 goals respectively in round 8 along with Mason, Atkins and Huntington who were named amongst their best against the Bushrangers.

Missing from the Ranges side will be Christian Petracca who booted a handy two goals last week against the Falcons and James Parsons who have both been called away to play for Vic Metro. With all of the momentum from a five match winning streak, the Ranges will be looking to continue their good form against the Queenslanders.

Queensland has only won one TAC match this year, sneaking in a one point victory over Gippsland Power. They will be keen to snatch another win but an inform Eastern Ranges may prove too strong.

For the first time this season the Dandenong Stingrays will be hoping to win back to back matches as they take on the tenth placed Northern Knights.

The Stingrays had a convincing win over Tasmania last week and are sixth on the ladder, having played one game less than the top five teams.

The Stingrays have named last week’s top goal kickers Joyce, Tomkins and Dale to take on a Northern Knights side that will be keen to win back some pride after a disappointing loss to the Western Jets in round 8.

The Knights will be minus Vic Metro players Sam Switkowski, Jason Castagna, Reece McKenzie, Ryan Tester and Zach Ballard. Switkowski, Ballard and Tester were also among their best last week.