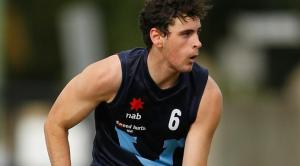 After an even first term, Metro kept its opponent goalless for the next three quarters to run out commanding winners 15.20 110 to WA 2.11 23.

Metro dominated the scoring, and if not for their inaccuracy - 35 scoring shots for 15 goals - could of won by more.

Christian Petracca impressed in his first 2014 Vic Metro game with 27 disposals, seven marks and two goals, while Tom Wilkinson led the disposals with 30.

Vic Metro's next game is on Sunday June 8 versus Vic Country at Visy Park.

Division One - Round Two continues tomorrow:

See below Leon Harris preview Country's Rd 2 match, including highlights of their Round 1 win over Metro.