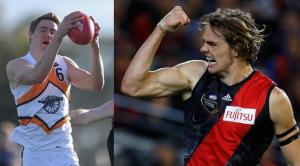 The 201cm forward/ruckman from the Essendon Football Club is strong overhead and has great mobility. The left-footer is also an accurate set-shot at goal.

The son of Anthony Daniher, Joe was a high-profile first round father-son selection in 2012 (selection 10 overall). He made his AFL debut in Round 11 last year and played five games.

The 20-year-old has played every game this year and his last two weeks have been his best with three goals against both Richmond and the GWS Giants.

Of the players eligible for the NAB AFL Rising Star, he is currently ranked first in goals, contested marks and marks inside 50.

Calder Cannons Talent Manager Ian Kyte said we are only just starting to see what Joe is capable of at AFL level.

“He only played 10 or 11 games (in his 18th year), as we managed him to try and get him ready for AFL footy in his first season.

“He showed all the potential to be as good as any player I have seen coming through the system, probably since the early days when Chris Judd went through the Dragons.

“He has looked over the last few weeks that he is starting to feel at home at that level, and it is a sign of thing to come.”

Essendon coach Mark Thompson said he is pleased with the development of the key position player.

“We’re thrilled Joe has been recognised as a Rising Star nominee this week. He has shown glimpses of his potential, he is young but he is a true professional. He works hard, he trains even harder and he takes the game on,” Thompson said.

“It’s exciting to see someone with a big future, and that’s Joe. While he does still have a long way to go, we have no doubt he will help our football club for many years.”

Joe was recruited from the Aberfeldie Junior Football Club and the Calder Cannons. He represented Vic Metro in the 2012 NAB AFL Under-18 Championships and was named an Under-18 All-Australian. Joe is also a graduate of the AFL Academies program.