Five in a row for Rebels 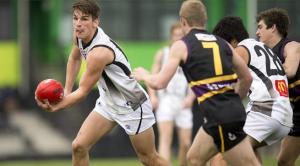 The North Ballarat Rebels have consolidated a position in the top eight with a six point win over the Murray Bushrangers in round ten of the TAC Cup at Craigieburn.

Despite being held goalless in the third term, the Rebels regrouped in the last quarter with Rowan Marshall the hero, booting three last quarter goals to help his side to a 13.8.86 to 12.8.80 win, as Shane Goss reports.

The Bushrangers kicked with the aid of a slight breeze and began well thanks to Jackson Clarke who bagged two goals in the first quarter. They went to the first change leading by seven points in what had been an entertaining opening.

It was in the second quarter where the Rebels got a break. They kicked six goals to two with Jesse Palmer and Keegan Mason proving dangerous up forward while Oscar McDonald and Josh Webster were supreme in the air and with their run across half-back. At half time North Ballarat held sway with a 21-point lead.

The Bushrangers responded after the main break and held the Rebels goalless for the third term adding three themselves. Tall forwards Nick Coughlan and Joshua Schache the main headaches for Rebels defenders.

Skipper Nick Mellington was winning a lot of the ball for the Bushrangers while Connor Brown was standing up in the last line of defence. At three-quarter-time the Rebel’s lead had been cut to just three points - 9.8.62 to 9.5.59.

Goals again to Coughlan and Schache saw the Bushrangers regain the lead early into the final quarter. They were defending stoutly and although kicking into the wind it looked like the Bushrangers were the team more likely.

Enter Rowan Marshall. The lanky ruckman from Portland went forward and plucked the Sherrin out of the air to boot three match saving goals in seven minutes.

When Jacob Wheelahan gathered the footy in the forward pocket fifteen minutes in and snapped truly, the Rebels had some breathing space. Schache kicked his third for the Bushrangers not long after to provide fans in the stand with some nervous moments.

However the Rebels prevailed for a fine win after looking in trouble mid-way through the term. It was their fifth win in a row and turned the tables on their 39-point loss to the Bushrangers back in round four.

Marshall with three, Palmer, Mason and Tom Templeton two each, were the major goal kickers for the Rebels while for the Bushrangers Coughlan bagged five, Shcache three and Clarke two.

Round 11 is the ‘Country Round’ which sees both clubs face tough challenges with the Rebels at home to the Dandenong Stingrays and the Bushrangers return to Craigieburn to face the Geelong Falcons.