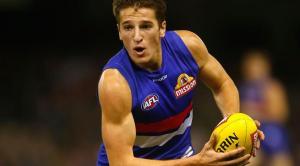 Marcus, 18, played a key role in the Western Bulldogs’ eight-point win over Collingwood at Etihad Stadium on Sunday. His 22 possessions, five marks and four tackles were complemented by his composure under pressure — highlighted when he calmly spotted Jason Tutt inside 50 who kicked the match sealing goal in the dying minutes of the game.

Playing in his sixth AFL game, he kicked his first AFL goal in the third quarter at a crucial time of the match.

Standing at 192cm, Marcus plays as a tall midfielder, but his agility and endurance enables him to play in any position. He made AFL debut in Round Five.

Northern Knights Talent Manager Peter Kennedy said Marcus was a late developer in the system, with his finish to the 2013 season the key to his rise up the draft order.

“His last game for Vic Metro was his stand out match, then he blossomed as a player when he returned to the Knights, moving from the wing to the midfield and took his football to another level.

“He is a terrific young man and worked hard at his footy at TAC Cup level, displaying a great commitment, work ethic and attitude, and he is now getting the reward for effort.”

“Marcus loves the game, he loves helping his teammates and just wants to be a great Western Bulldogs person,” McCartney said.

“He’s really starting to forge ahead with his footy because he listens, learns the game and he implements his learnings — he comes to the club every day to get better.”

“Marcus has a very bright future, and it’s our responsibility to manage him the right way and give him every opportunity to have a long career at our club.”

He was recruited from the Eltham Panthers Junior Football Club and the Northern Knights.

Marcus is the Western Bulldogs’ first rising star nominee this year, and the second for the Northern Knights after Dylan Buckley in Round 2.