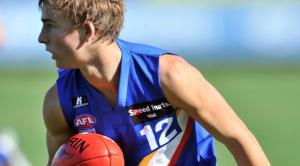 Three former Eastern Ranges players will all debut in Round 15 AFL action, as Kate Smart reports.

2013 graduate Daniel McStay and 2011 draftee Max Warren will debut against each other in the Brisbane versus North Melbourne clash Saturday, while McStay’s premiership teammate Mitch Honeychurch will take to the field for the first time for the Western Bulldogs on Sunday against Melbourne.

Eastern Ranges coach Darren Bewick will proudly celebrate this weekend’s AFL round of football, with the premiership coach having seen over the development of all three players in his time at the club.

Described by Bewick as a talented and skilful footballer, Warren, pick 10 in the 2011 rookie draft, has spent the last three years on North Melbourne’s rookie list learning his craft. He’s had a consistent 2014 with North Ballarat in the VFL, being used in a stopping role this season.

Warren has taken on and beaten the likes of Geelong’s Stevie Motlop and Western Bulldog Daniel Giansiracusa in his impressive VFL performances, and Bewick believes he has learnt a lot at AFL level on the last few years.

“His skills were very good.

“He just had to learn how to train and work hard,” Berwick said.

“Once he got there (the AFL) he realised all of the things we were trying to teach him, he realised what we were talking about and has really knuckled down.”

Bewick said it’s fitting that Warren and McStay make their AFL debut in the same match, even though it will be for different teams, as it was Warren who presented McStay with his first Eastern Ranges jumper.

McStay will be the eighth debutant for the Lions this season when he runs onto the field. Taken at pick number 25 in the 2013 National Draft, Daniel McStay was late coming into the Eastern Ranges football program. Bewick recalls he had all of the athletic attributes needed to play football and worked hard to learn how to transfer these attributes.

“He was very diligent in how he went about things, and now it is paying dividends for him.”

The final of the three former Eastern Ranges players to make his AFL debut this weekend is McStay’s premiership teammate and Western Bulldog, Mitch Honeychurch, who was the number 60 draft pick in the 2013 draft.

Berwick remembers Honeychurch as a player who “just loved the game of footy. He loved the club and the competitive side.”

Honeychurch has kicked eleven goals in his last three VFL matches for the Footscray Bulldogs. In Round 10 he finished with twenty-five possessions and a five goal haul against Port Melbourne.

Honeychurch was described by Bewick as hard working and a player who set high standards for himself. This work ethic and high standards are reflected in his solid 2014 VFL season.

Watching young talent that you’ve nurtured from juniors make their AFL playing debut is a special moment for anyone involved in the TAC Cup.

To see three former players debut on the same weekend is a proud moment for all involved with the Eastern Ranges.