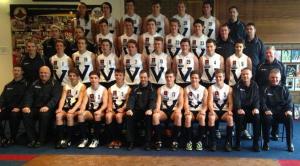 The next generation of players that will take to the elite stage in coming years have been chosen as part of the Vic Country and Vic Metro Under 16 squads.

Each squad has named 30 players, including five emergencies, for the NAB AFL U16 Championships which begin on the Gold Coast on Friday July 4.

As AFL Victoria Metro High Performance Manager Anton Grbac explains, the U16 Championships is the first step for these players in the national talent pathway.

“We pick with an eye on the future, to see whether a player will be an U18 Championships player.

“We do not look beyond that. If you are good enough to be an U18 Champs player that means you will obviously be considered for a draft. But you don’t need to worry about setting those benchmarks at this level,” Grbac said.

The Vic Metro side will be coached by Eastern Ranges assistant Mark Fisher. The coaching staff has kept a close eye on the players since late February when clubs held internal trials at regional level. The key selection period was during the formal U16 carnival over two weeks during the April school holidays.

A recent trial game versus Vic Country gave the squad the perfect warm up for the Championships.

“I think the group got a rude awaking to the demands of nationals when we played Vic Country in a trial game. Country were far better at the physical part of the game and the work part of the game.

“The guys got a quick reality check of what the nationals really mean, and to what elite football means,” Grbac said.

“Across the board we are excited about the shape, size and athletic ability of the group, and are happy where the prospects are for the types of players that are on our list, even to the point where the players that missed out on the cut of 50 were quite unlucky.”

AFL Victoria Country High Performance Manager Leon Harris will gather the Country squad, coached by Geelong Falcons assistant Paul Henriksen, a few days prior to the Championships for the groups’ final training session. The reigning U16 champions will look to defend their title in 2014.

“The Country players will come in a few days before we fly out. We had a trial match versus Metro, and the initial form from that game was good for the new group,” Harris said

“You never know at U16 level, but there were very encouraging signs which is pleasing.”

A further 11 young Victorians will also participate in the NAB AFL U16 Championships as part of the World Team and Flying Boomerangs squads.

Six Victorians won selection in this year’s World Team after being a part of the U15 Vic All Nations Squad which won the National Multicultural Championships in April.

Similar to the World team, the Flying Boomerangs is a squad made up of U15 indigenous footballers who took part in the National Kickstart Championships.

Five Victorians have been chosen in the Boomerangs line-up, rewarded for not only their performances but their leadership, school attendance and attitude.

The World Team and Flying Boomerangs will compete in a Division 3 of the NAB AFL U16 Championships against each other and teams representing the South Pacific and North-West Western Australia.