Title up for grabs for Vic Metro 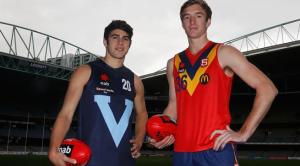 After six rounds of action, the 2014 NAB AFL U18 Championship title will be decided by the final game, when Vic Metro hosts South Australia at Simonds Stadium.

The finale to the Division One Championship does not however produce a simple ‘whoever wins, wins the title’ equation.

Well it does if the winner is South Australia. SA is currently a game ahead of Vic Metro on the ladder, so a win will guarantee them back to back titles.

Where the result of the final game remains intriguing is should Vic Metro win, they won’t necessarily win the title. Currently 5.5% separates the two sides, and Vic Metro will need to win by a minimum seven points to guarantee themselves the title.

In a strange twist, the Championship result could go down to the final score of the Vic Metro versus SA game, with the Croweaters able to claim the Division One crown even if they lose the final game – if they restrict that loss to under a goal.

What is means is that after six rounds, it might be a rushed behind, an out of bounds on the full or a late goal that helps decide who will win the 2014 NAB AFL U18 Championship title. This can only add to the excitement of seeing the best U18 talent from around Australia take to the field.

Leading into the final game of the Championship, the possible equations have not been a consideration for Vic Metro coach David Flood. The focus for Flood is to continue to get the best out of his playing group and challenge them in the final game.

“To be honest, I have just focussed on our game, and tried not to get caught up in any of the other sort of things.

“We still have two or three areas we would like to improve on in the final game.

“We have been good in most areas, but if you want to get to that next level, you need to try and get that little bit better, and that is what the final game is all about for me; just that continual improvement.”

With the reduced squad of 25 for the final two matches, it has given Flood the chance to test his players in positions that they might be unfamiliar with. Three changes will be made for the final game.

“We try and find a core spot for each player, but then try and grow their game with that little bit of versatility, whether that is in another one or two positions.

Reflecting on the Round 5 win against Western Australia, Flood was pleased with the output from some of his forwards, especially the likes of Paul Ahern (Calder Cannons) and Brenton Payne (Western Jets).

“He (Ahern) is a special talent. He is a very instinctive type of player and you just need to let him go sometimes.

“He has been one of the players that has thrived on the competitive nature of the championships.

“Every time the level has gone up he has adapted very well which is pleasing,” Flood said.

“I was very confident Payney and Liam Duggan would do well last week.

“They have a massive task as they live in Bacchus Marsh, they drive to Ballarat for school, and then they drive back to Melbourne for football training. It is a massive triangle, but now they are on school holidays and all of a sudden they have a chance to play a bit better.

“It is just one of the challenges these players face doing their VCE year. We must always recognise how much time and effort, not only the kids put in, but also the parents. It is a massive workload for all involved.”

Despite not worrying about percentages and how the results of other games have fallen, Flood believes the fact that the Championship has gone down to the wire can only be good for football in the future.

“It highlights that there is not that much between the sides, which is good for football that we have some good talent out there which is what the game needs.”

The game will be broadcast on Fox Footy and the AFL Live app, plus keep up to date with scores via twitter via @TACCup.

LADDER AFTER ROUND 6, Game 1