Rebels on a regional roll 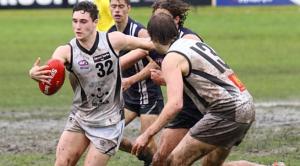 The winning streak for North Ballarat Rebels continues to roll on, claiming the points against the Geelong Falcons in Warrnambool on Sunday.

The Rebels have made a meteoritic rise up the ladder, from winless on the bottom of the TAC Cup table at the end of Round 5, to a game clear in third spot at the conclusion of Round 13.

The game on the weekend was important not only to help secure a top four position, but to also take TAC Cup football to their region.

“Being a Country TAC Cup team we believe it's very important that our regional cities and football communities get the opportunity to view the best underage football competition in Australia,” North Ballarat Rebels Talent Manager Phil Partington said.

“It's an opportunity for the local clubs, coaches, friends and family of the players within that regional centre to support the players as many may not have had this chance due to the distance and travel restraints.

Partington believes it is chance to expose the standard of the competition to the local region, provides young local footballers with a taste of what they might aspire to in the future.

“We generate fantastic crowds to these regional games and hopefully many young footballers that attended can aspire to play in the TAC Cup with the Rebels.”

Dom Moloney (South Warrnambool) made his debut for the Rebels, whilst three other Warrnambool players in Tom Schnerring, Tom Ludeman and Liam Howarth also took to the field at Reid Oval.

Partington highlighted the pathway from the region to not only the Rebels, but also the Falcons as well.

“The Warrnambool region has been a fantastic breeding ground for both the Rebels and the Falcons in the past with players like Jonathon Brown and more recently Martin Gleeson and Louis Herbert.”