Murray returns to the eight 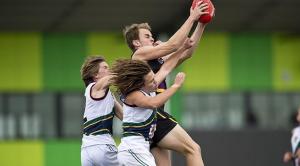 The Murray Bushrangers have crept back into the top eight after edging out the Tassie Mariners in round fifteen of the TAC Cup season at RAMS Arena in Craigieburn.

In a dour struggle all day, the Bushrangers managed to score the only goal for the final term to run out 10-point winners – 11.7.73 to 9.9.63 as Shane Goss reports.

The visitors from the Apple Isle would have felt right at home in the cold and overcast conditions which greeted them in Craigieburn. They opened in a spirited fashion, matching their northern counterparts with their attack on the ball.

Blonde haired Mitchell Rainbird stood out across half-forward giving the Bushrangers defence some worries. At the other end however, tall forward Joshua Schache was making the most of the Mariners lack of key defenders booting two first quarter goals as his side took a five point lead into the first break.

Rainbird again figured in the second quarter with a fine goal from the boundary line well out at the southern end. Teammate Ashton Dickenson kicked his second to keep the Mariners in touch as their midfield brigade including skipper Tim Jones and Caleb Hislop worked hard around the ground providing plenty of run and carry.

Levi Middleton booted a goal three minutes after the re-start to give the Bushrangers some breathing space. The Bushrangers appeared stronger around the packs with the bigger bodies of the likes of Jim Carroll, Jackson Clarke and Kieran Ellis enabling any outside run to benefit from their work.

The Mariners however knuckled down and at one stage hit the front, thanks to goals from Rainbird, his third, Nicholas Dodge and ruckman Josh Fox. Schache replied with his third to arrest the lead and the Bushrangers took a four point lead into the three-quarter-time huddle.

The Mariners were looking to win their first game in the TAC Cup for the year and could sense a scalp. The final term began badly for them however.

Nick Coghlan kicked his second to give the Bushrangers a narrow break, shortly after the Mariners leading goal-kicker on the ground and best player, Rainbird, was stretchered off with an ankle injury. With the lack of a key tall at either end of the ground the Mariners struggled to find a match winner.

Coach Adam Sanders lamenting his team’s lost opportunity after the game saying they needed someone to ‘take the game on’. Schache booted three for the winners, Coghlan and Middleton two each, while for the Mariners, Rainbird kicked three and Dickenson two.

Better players for the Bushrangers included Daniel Howe across half-back, Brydan Hodgson, midfielders David Mennen and Kieran Ellis and Carroll’s strength around the ground was important.

For the Mariners, Rainbird before leaving the field injured, Oliver Jones provided plenty of run from half-back, Tim Jones along with Hislop and Ben McGuinness all worked tirelessly.

The Murray Bushrangers face a tough task to stay inside the eight with a round sixteen date with the Calder Cannons in Wangaratta. The Tassie Mariners are on the road again, this time to Ballarat to take on the North Ballarat Rebels.