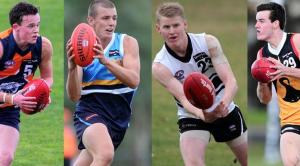 Thirty eight TAC Cup players have been invited to the state NAB AFL Draft Combine in October this year.

This takes the total number of TAC Cup players invited to the various Combines to 86, following on from the 48 invitees to the national NAB AFL Draft Combine, which was announced last week.

Geelong Falcons and Oakleigh Chargers topped the list of state Combine invitees with six each, followed by Calder Cannons, Northern Knights and Sandringham Dragons with four each.

All TAC Cup regions will have players at the Combine, with Sandringham leading the way with 12 players invited to the various combines, followed by Oakleigh Chargers with 11, and Calder and Geelong with 10.

Each AFL club provided a list of 25 players who they wanted to attend the state-based combine, with players that had two or more nominations receiving an invitation.

The state Draft Combine will see all the testing take place on Saturday October 4 in Melbourne, measuring a combination of athleticism and football skills as well as assessing each player’s personality and character – all essential elements clubs need to consider in the drafting process.