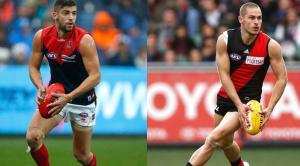 Football’s next crop of multicultural and indigenous stars is in good hands thanks to AFL Victoria’s new specially designed academies.

The David Zaharakis Squad, based at the Northern Knights, and the Jimmy Toumpas Squad (Dandenong Stingrays) were launched last month, giving boys from Melbourne’s north and south east exposure to the main stream talent pathway.

The programs are based on a similar initiative at the Western Jets, known as the Majak Daw Squad, which is in its second year and has proved a valuable tool in helping talented boys with a multicultural or indigenous background transition into the TAC Cup system.

All three squads will take to the field this Sunday at Punt Road Oval in a double header with the Laguntas indigenious squad.

The primary objective of the three squads is to identify players who potentially have a future at the AFL or VFL level and through specialised training – under the guidance of expert coaches and positive role models – help them develop on and off the field.

Zaharakis and Toumpas just don’t hold naming rights to the squads, but they also attend most training nights and provide hands on coaching.

“Jimmy and David are both AFL Australia Post Multicultural Ambassadors and are really passionate about helping boys like themselves (both have parents born overseas) make the most of their football opportunity,” AFL Victoria Engagement Manager Xavier Moloney said.

For Zaharakis, who is a former captain of the Northern Knights, it also allows him to give back to the pathway which helped him become the footballer he is today.

Moloney said the success of the Majak Daw Squad had generated enormous benefits which helped inspire these two new academies.

“From last year’s first intake of the Majak Daw Squad, we had a number of boys who are now playing or training with the Western Jets, which is a terrific result.”

“The programs centre on leadership development and life skills that have players feeling empowered, and having a good sense of self-worth and value which ties in well to making good decision for themselves, their careers and in general life.

“Team building, improved self-belief, decision making and communication are core curriculum topics covered and our aim is to also help educate parents and families on the AFL talent pathways and TAC program.

The squads are made up of boys from many different backgrounds with some participants drafted in after high performance testing at schools in both regions to identify athletes with the right attributes to adapt to Australian football.

Both programs will enjoy an extensive week training regimes and play exhibition games to provide another opportunity to impress TAC Cup Talent Managers and possibly earn selection on their respective TAC Cup lists.