Stringer the next Rising Star nominee 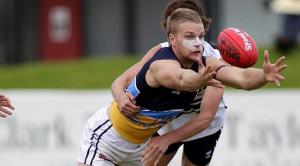 Jake was unlucky not to be nominated already, with his consistency and form in recent weeks making him a stand out for the Western Bulldogs and the Round 20 NAB AFL Rising Star nominee.

Drafted by the Bulldogs with pick five in the 2012 NAB AFL Draft, Jake’s Round 20 performance against St Kilda also saw two of his four goals nominated for the Hungry Jack’s Goal of the Year.

Renowned as a fierce competitor during his time in the TAC Cup, Jake suffered a severe leg injury that some thought would end his career there and then.

His coach at Bendigo Pioneers, Dave Newett, witnessed firsthand Jake’s determination and resilience to make it back to the elite level.

“My first year as coach was his top age year at Bendigo. I arrived in November and saw him limping around the oval at pre-Christmas training. He could barely run and had an awkward gate, that’s when a lot of people were thinking he was never going to get back,” Newett said.

“When he came back and kicked nine goals against the Knights in his first game, it showed his class, competitiveness and his ability to win the one on ones.

“At the end of the year he played some VFL and showed against men that he was quite capable.”

Newett knew Stringer had plenty of potential and praised the Bulldogs by taking what some perceived a risk in drafting him.

“We could see what he was going to produce if he got his body and leg right, so credit to the Bulldogs for being able to show the faith to take him.

“His game sense and ability to know what the situation is around him has been highlighted by some of the goals he has kicked this year.”

He represented Vic Country the 2012 NAB AFL Under-18 Championships and is a graduate of the NAB AFL Academies.

He was recruited from the Bendigo Pioneers and played his junior football with the Eaglehawk Junior Football Club.