Top 8 spots up for grabs 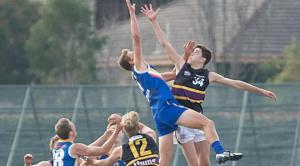 It all comes down to the Round 18 results to decide who makes the 2014 TAC Cup finals, and who will have the coveted double chance.

The final top 8 order can alter dramatically dependant on the results this weekend.

The door is open for second placed Calder Cannons to take spot if they can beat Northern Knights and North Ballarat Rebels can take home ground advantage and knock off top placed Oakleigh Chargers.

Both the Knights and Rebels will relish the chance to upset the minor premiership aspirations of their opponents. Fourth spot potentially beckons if the Rebels can get the win, while the Knights have finished the season strongly and have plenty to prove in their final game of the year.

Percentage is on the Jets side who currently sit third with a 12% buffer. They hit the road in Round 18, travelling to Morwell to take on an improving Gippsland Power who always provides a tough contest at home. A win will lock in third place for the Jets and cap off an outstanding season with their first top 4 finish since 1996.

Notably, it will be the first time in ten years that perennial finalists Gippsland Power will miss out on post season action. The young list has developed substantially in 2014 and will be looking to have a big impact in 2015.

Fourth placed Dandenong Stingrays take on sixth placed Geelong Falcons in what is shaping to be the game of the round. With just seven percentage points separating the two teams its set to be a thrilling contest. After upsetting the Chargers, the Falcons have their sights set on a top four finish and have the fire power to pull off another big win.

Murray Bushrangers and Eastern Ranges are chasing the remaining final’s spot. Murray, which holds a one game break, can seal finals action with a win against the Pioneers in Bendigo.

Round 18 will be an enticing entrée to the TAC Cup finals, where it has been proven time and time again that once you make it in, anything can happen.