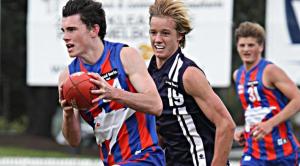 If the Round 17 clash between Oakleigh Chargers and Geelong Falcons is anything to go by, get ready for a classic Qualifying Final encounter this Saturday.

Seven points was the biggest margin at any of the breaks throughout the afternoon the last time they met just a fortnight ago, with the Falcons eventual winners by just one solitary point.

Geelong’s Joe Maishman levelled the scores in the final term, but it was a behind off the boot of Max Augerinos with three minutes to go that helped the Falcons lock in its spot in the finals, and leave Oakleigh in danger of losing top spot in the final round.

Earlier in the year in Round 5, only nine points separated the sides at three quarter time before the Chargers kicked three goals to nil in the final term to claim a 32-point victory.

One player that was missing in Round 5 but returned for the Round 17 clash was Falcons spearhead Patrick McCartin who kicked almost half of Geelong’s score with five goals and will be the player to contain this weekend.

It has not been the ideal finish to the season for the Chargers, the side that led the competition in top spot for all but three rounds. Returning to the top of the ladder in Round 7, Oakleigh spent 11 weeks in a row on top of the TAC Cup table before being deposed by Calder Cannons in Round 18 in the race for the minor premiership.

After just the one loss in the first 13 rounds of the season (to North Ballarat Rebels in Round 6) Oakleigh has suffered defeats in three of its last four matches to finish in second spot; with those three defeats all to top eight teams.

Geelong on the other hand has benefitted from the return of its private school and U18 Championship players late in the season, winning four of their last five games to jump from sixth to third to enjoy a double chance in the finals.

Oakleigh will need to find accuracy towards goal this weekend, with 23 scoring shots (5.18) to 10 last week not seeing them register a win. In their four defeats for the season, they have been shut down up forward, struggling to find scoring options which they will need to rectify against the Falcons.

Conversely fire power has been the key to Geelong’s strong finish to the season, with 11 goals the lowest output they have produced in the final five rounds as they prepared for finals.

Both sides will be packed with talent this weekend, with the versatile Darcy Moore, Jordan De Goey and Alex Urban the players to watch for Oakleigh, and McCartin, Teia Miles and Darcy Parish the key players for Geelong.

A win will book a spot in a Preliminary Final, but a loss will see them play the winner of Western Jets versus Dandenong Stingrays.