Six remain in hunt for premiership 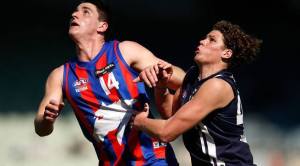 Six teams remains in the hunt for the TAC Cup premiership after a huge week one of finals action.

It was down to the wire in three of the four games with the Murray Bushrangers and Western Jets vanquished from September after both suffered narrow losses to the Sandringham Dragons and Dandenong Stingrays respectively.

While the Calder Cannons booked a preliminary final berth and cemented their place as premiership favourites with a big win over Northern Ballarat Rebels, the Oakleigh Chargers were forced to dig deep to deny the Geelong Falcons and earn the same opportunity.

The Chargers trailed the Falcons at every change in the match of week one but dragged themselves to a stoic one-point victory thanks to a desperate final term.

Kade Answerth was in everything for the winners with his 26 touches keeping the Chargers in the game early. Daniel McKenzie had it 20 times, while Marc Pittonet was also crucial in defence.

The Falcons now meet Dandenong in the second semi-final after the Stingrays outlasted the Jets at Visy Park.

Despite trailing at every change the Jets remained within striking distance until the dying minutes and proved they are arguably 2014’s most improved side.

Connor Menadue collect 27 possessions, while Dillon Viojo and Liam Duggan caused plenty of headaches on the outside.

But in the end it wasn’t enough to halt the Stingrays, whose superior depth shone through.

Jacob Weitering bagged three goals and Daniel Moloney controlled the midfield with 26 disposals.
Alex Harnett (24) and Blake Mullane (21) were other to impress.

It was a similar tale in the other elimination final between Sandringham and Murray.

The Dragons led for almost the entire afternoon but were unable to ever fully shake off the gallant Bushrangers.

In an exhaustive affair, the Dragons held firm under pressure to post a nine-point victory and keep their season alive.

The Dragons’ confidence boosting win comes at the ideal time with their sights now trained on sending the North Ballarat Rebels out of the finals race in straight sets.

Despite six goals to key forward Jesse Palmer, the Rebels proved no match for a powerful Cannons outfit in the first qualifying final.

After giving up a 21-point quarter time lead, the Cannons sprang into action with 23 of the next 26 goals.

Their lead was just five points at the main break but by the final siren the deficit had grown to a whopping 99-points.

The Cannons’ running game was irresistible as Damian Cavka (28 disposals and five goals) enjoyed one of the most impressive individual performances of the TAC Cup season.
.
Jayden Foster booted six, while Josh Cauchi (four) and Paul Ahern (three) also piled on the scoreboard pressure.

The win earns the Cannons a week-off and date with the winner of the Falcons v Stingrays semi final.