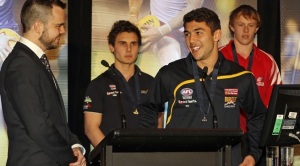 This Sunday night the TAC Cup community will gather to celebrate the season and award the 2014 Morrish Medal.

Awarded to best and fairest player in the competition, the Morrish Medal is voted on by the TAC Cup umpires.

Northern Knights and Gippsland Power have produced the most Morrish Medallists - both clubs having five winners - while Calder Cannons are close behind with four winners.

Since receiving their medals and progressing in their football careers it has been a mixed bag of results for last year’s winners.

Chisari returned to the Pioneers as a 19 year old and showed patches of his 2013 form, but unfortunately had an injury interrupted season. Cameron joined Werribee in the VFL, but contracted glandular fever and missed most of the year due to the illness.

Scott followed his Power coach Nick Stevens across to Glenelg and has been a solid player in the SANFL. While Cavarra joined Frankston in the VFL and was a shining light for the Dolphins, his great season rewarded with selection in the VFL Team of the Year.

It’s never easy to predict a winner in such an even competition, but let’s take a look at the contenders from each club:

Bendigo Pioneers may not have had many wins as they would have liked, but they have had some stand out individual performances in 2014. Billy Evans and Aidyn Johnson are both red hot contenders.

With such a strong team there is no surprise that Calder Cannons have a number of Morrish favourites, but that team strength can often mean the votes get spread across a wide number of players. Expect Touk Miller, Peter Wright, Mark Kovacevic and Zak Wunhym to feature.

The Stingrays have produced two winners in the past and with Jack Lonie and Tom Lamb having exceptional seasons they may just make that number three. Both Lonie and Lamb represented Vic Country so the big question will be did they poll well enough in their limited number of games?

While they didn’t make the finals, there were still plenty of positives for the Ranges. Luke Hannon and Rory Sheridan-Ferrie were very dependable and consistent performers. Christian Petracca has had an incredible year winning best and fairest awards for Vic Metro and in the National Championships. He may just need to find more room in the trophy cabinet.

Once again the Falcons have had a successful season with a talented list of players. Teia Miles work rate has been phenomenal, his 19 disposals and 5 marks a game hard for the men and women in orange not to notice. While he may not have played as many games as Miles, forward Patrick McCartin has won games off his own boot this year and also expected to poll well in the voting.

It was a season of what could have been for the Power, but it wasn’t through a lack of effort from Alex Carr. Found more often than not at the bottom of a pack, Carr racked up an average of 23 disposals per game. Key position player Sam Skinner had a good year, while bottom aged ball magnet Nash Holmes also had big numbers in his debut season.

The Bushies had a great year with a number of key contributors really stepping up this season. Nathan Drummond returned as a 19 year old and continued to get better and better with every game he played. Expect Drummond to feature in the voting, along with team mates Nick Mellington and Keiran Ellis who were also a big part of the Bushrangers success in 2014.

It was a slow start for the Rebels, but a huge second half to the season elevated them to the top four. A big part of that winning run was ruckman Rowan Marshall who average 26 hit outs a game giving the prolific Rebels midfield first use of the ball. Oscar McDonald another consistent performer for North Ballarat, regularly featuring in the best players he is also a red hot chance to win the medal.

The Knights are another team that might not have put the wins on the board, but they still managed to unearth some very talented players. Reece McKenzie’s 10 goal game was the TAC Cup stand out individual performance of the year and sure to receive votes. Sam Switkowski and Billy Murphy are also contenders after having great seasons.

The Chargers have had a great year winning 13 out of 17 matches. With an ever changing list due to school football and National Championship commitments it has been a consistent team effort to maintain the winning run. Prolific ball winners Toby Mclean and Alex Urban have really stood out for the Chargers and are strong contenders to take out the competitions top honour.

Like the Chargers, Sandringham Dragons have had a number of players come through their program in 2014. From that long list, Angus Brayshaw and Brayden Maynard have been standouts and a big factor in the Dragons finals push. Both feature prominently in every stats column and kicked crucial goals when needed. Taylor Grace another ball magnet that should poll well.

The Jets have never had a player win the Morrish, but 2014 may just be the year all that changes. As a team they have continued to develop and improve, with a number of individual players taking their game to the next level. Brayden Monk has averaged 19 disposals and been a dependable player all season, Liam Duggan and Jackson Volpato also strong contenders.

The 23rd Morrish Medal night will also see the announcement of the TAC Cup team of the Year, the TAC Coaches Award and recognition of the TAC Cup Leading Goal Kicker - won this year by Jayden Foster from Calder Cannons.

You can watch a live stream of the event via www.taccup.com.au and follow updates of the night on twitter @TACcup #Morrish