From Maffra to Morrish by Carr 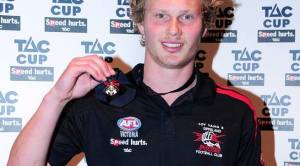 Alex Carr knew that he had put everything he could into his third season with Gippsland Power, but never in his wildest dreams did he expect to take out the Morrish Medal.

On the day of the awards night, Carr was too focused on playing football to give the Morrish a second thought.

With Power missing out on finals for the first time in 10 years, Carr was able to return to his home club Maffra to help the senior side reach the finals of the Gippsland League.

He put in a typical performance, being named Maffra’s best player for the day, but couldn’t stop the onslaught from Wonthaggi who went on to win the semi-final by 41-points.

There wasn’t much time to feel the hurt of a physical match and the loss of a final as he jumped into the car for the two hour drive to Eithad stadium. With Carr’s parents overseas on holidays, his uncle John was there to support him and drive him to Melbourne.

As his name was being called out in as one of the midfielders for the TAC Cup team of the year, Carr was just pulling in to the Etihad Stadium car park. He walked into the victory room and was ushered straight on stage before he could even say hello to his coach and team mates.

It was all a whirlwind, but Carr was finally able to relax as the vote count started. After the first 14 rounds he had only compiled 7 votes, he thought he was well out of contention.

After an uncharacteristically slow start to the season Gippsland had turned their fortunes around and Carr was a major factor in the Power winning three out of their final four games.

Highlighting his influence in the midfield, Carr was ranked first in contested possessions in the competition and second for most clearances.

Visibly shaking as he took to the stage to be presented the medal by AFL Hall of Fame member Brad Johnson, a shocked Carr thanked all those who had supported him, especially his midfield coach Scott McDougal who he worked closely with.

After missing most of his 17th year through injury Carr played as a top ager in 2013.

He returned to the club as a 19 year old and went about repaying the faith that Coach Leigh Brown and Talent Manager Peter Francis had showed in him by the only ways he knows how – hard work and fierce determination.

With a young list, Carr was relied heavily upon to be a leader. Averaging 24 disposals, he was able to help his young team mates without compromising his own game.

Gippsland Power has dominated the Morrish Medal in recent years with Carr completing a three-peat of Power winners that includes Josh Scott (2013) and Nick Graham (2012).

It was very close to being five wins in a row with Danny Butcher a runner up by just 1 vote in 2011 and Dyson Heppell wining in 2010. Jarryd Blair (2008) and Matthew Stolarczyk (1999) Power’s other Morrish winners.

Peter Francis ranks Carr’s win as the most impressive out of the group given that he was more often than not playing in a losing team whereas the other boys were part of teams that went deep into finals.

It may take a while for his achievement to sink in, but the work to be done on a farm doesn’t stop, even for a Morrish Medallist. It was back to reality for Carr this week who will continue to work on a local farm while he allows his body to recover from a long season.

Like all TAC Cup graduates, Carr would love to be drafted and will look to pursue a football career at the highest level possible.